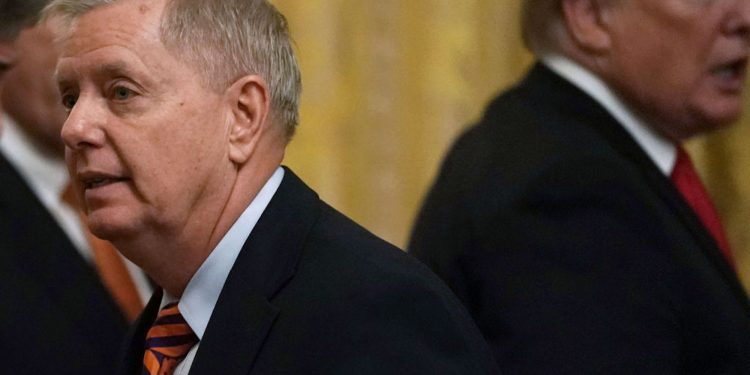 Sen. Lindsey Graham on Sunday said that Americans will enter the ballot box this year without a focus on the January 6 Capitol insurrection, but will register their opposition against what he calls “a failed Democratic radical agenda” that has imperiled the state of the country.

During a WABC radio interview with the New York businessman John Catsimatidis on “The Cats Roundtable,” the South Carolina Republican framed the 2022 midterm elections as a rejection of what he said was government overreach.

“These folks running our country in the House and the Senate and Biden don’t know what they’re doing,” he said, pointing to inflation, the sharp rise in illegal crossings at the US-Mexico border, and last year’s withdrawal of US troops from Afghanistan.

He added: “These are the most dangerous times since the late ’30s.”

During the late 1930s, the US continued to experience the deep financial tumult of the Great Depression, with the country also readying itself for the earliest stages of World War II.

The president on Thursday gave a forceful address commemorating January 6, where he declined to directly use former President Donald Trump’s name, but referred to him as a “defeated former president” and stated that “his bruised ego matters more to him than our democracy or our Constitution.”

Graham — who remains a strong ally of Trump despite rejecting the former president’s debunked election claims after last year’s insurrection — was displeased with Biden’s speech.

He pilloried the address from Biden — his former personal friend — describing it as “awful.”

“He had a chance to talk about how democracy worked … how the system worked … we need not let this happen again … praise those officers who fought back … condemn the attack and try to bring the country together,” Graham said of the president on the Sunday program.

Vice President Kamala Harris on Thursday emphasized the importance of the Capitol riot, comparing it to Pearl Harbor and 9/11, two seminal moments in American history.

“Certain dates echo throughout history, including dates that instantly remind all who have lived through them where they were, and what they were doing, when our democracy came under assault,” she said at the time. “Dates that occupy not only a place on our calendars, but a place in our collective memory: December 7th, 1941, September 11th, 2001, and January 6th, 2021.”

Graham rejected the actions of those who stormed the Capitol on January 6, calling it a “dark day,” but doesn’t place blame on Trump for the events.

“People need to be punished. And they will be,” he said.