‘Let’s stick with the facts’: A federal judge obliterated Trump’s lawyer’s claim that he urged his supporters to be peaceful on January 6 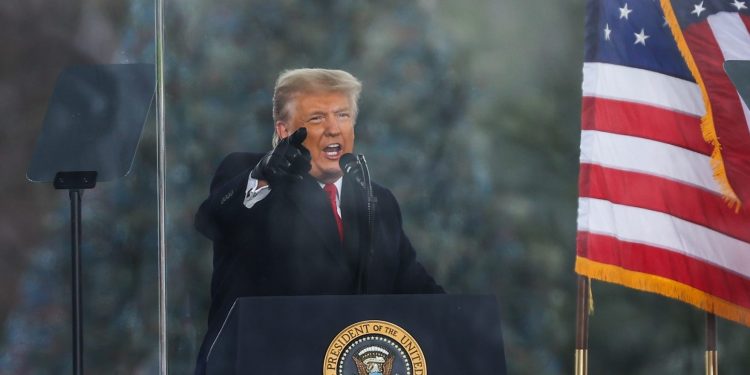 A federal judge on Monday forced lawyers for Donald Trump to reckon with his hours of silence during the January 6 attack on the Capitol, asking in court whether the president’s initial inaction could be considered a tacit endorsement of the day’s violence.

US District Judge Amit Mehta also rejected Trump’s lawyer’s claim that he urged his supporters to be peaceful on January 6, reminding the lawyer to “stick with the facts.”

During a court hearing Monday, Mehta noted that, for a “two-hour period” on January 6, Trump did not “take to Twitter or to any other type of communication and say, ‘Stop, get out of the Capitol. What you are doing is not what I wanted you to do.'”

“What would you have me do with the allegation that the president did not act?” asked Mehta, an Obama appointee who joined the federal bench in 2014.

Mehta’s question came during oral arguments over a trio of civil lawsuits, filed by House Democrats and Capitol police officers, alleging that Trump’s incendiary rhetoric incited the Capitol breach. At a rally that preceded the Capitol siege, Trump told his supporters, “If you don’t fight like hell, you’re not going to have a country anymore.”

In court Monday, Mehta asked whether Trump’s inaction could be considered “ratification” that agreement.

Trump’s lawyer, Jesse Binnall, pushed back against the assertion that the former president could face legal consequences for action he didn’t take.

“The president cannot be subject to judicial action for any sort of damages for failing to do something,” Binnall said.

Binnall argued that the president told his supporters to “peacefully and patriotically” make their voices heard on January 6.

But that statement was outweighed, Mehta said, by Trump’s earlier calls to “fight like hell” against the 2020 election results. Mehta said there was no doubt “threats” and “intimidation” were used on January 6, and he noted that the question was whether Trump’s own actions and statements “incited” the violence.

“Let’s stick with the facts,” Mehta said, adding that he wasn’t “interested” in “whataboutism.”

He continued pressing Binnall on whether Trump’s call for his supporters to march to the Capitol and his use of words like “fight” and “show strength,” followed by Trump’s supporters storming the Capitol, satisfied the standards required to establish conspiracy.

“So the president, in your view, is both immune to inciting the riot and failing to stop it?” Mehta asked.

Binnall replied that “the president cannot be subject” to any judicial action because he “failed to do something.”

Joseph Sellers, a lawyer for House Democrats, countered that claim and said the “fervor” and “energy” of Trump’s supporters directly preceding the Capitol riot indicated that he knew what they were planning to do.

But Mehta pushed back, telling Sellers the plaintiffs’ allegation of a conspiracy in this case is “unusual” and potentially “problematic” because the lawsuit does not allege that there was a direct meeting between the defendants including Trump, his then lawyer Rudy Giuliani, and the far-right groups Proud Boys and Oath Keepers.

Alleging a conspiracy in the absence of such a link is “dangerous” because the defendants couldn’t necessarily have controlled the reaction of Trump’s supporters.

Sellers conceded the point, but emphasized that Trump “ratified” his supporters’ actions after the Capitol riot.

Trump’s initial silence during the Capitol breach has also come under scrutiny from the special House committee investigating the January 6 attack. The panel’s top Republican, Rep. Liz Cheney, said last month that the committee was exploring the question of whether Trump, “through action or inaction,” sought to impede Congress’ certification of now-President Joe Biden’s electoral victory.

The committee has released texts showing that Trump’s allies — including his eldest son, Donald Trump Jr., and Fox News hosts — pleaded with former White House chief of staff Mark Meadows to have Trump order the violent mob to stand down. In the lawsuits against Trump, House Democrats pointed to his initial silence during the January 6 attack as evidence of an alleged agreement with the mob to block the certification of Biden’s victory.