Leadership and Management in an Era of Change 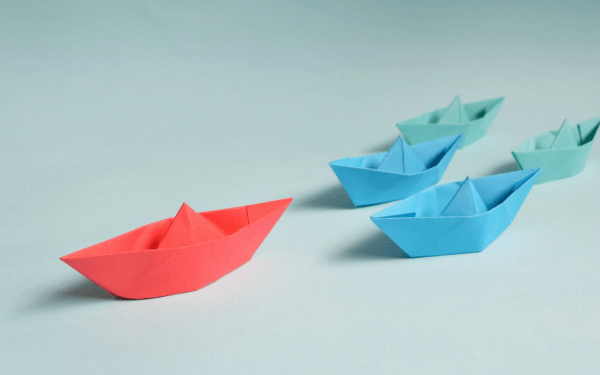 Many people still believe that “leadership” and “management” are the prerogative of certain positions. Research tells us that this is not the case. In the context of the structure of a modern organization, which is more than a century old, this means that leadership is handled by a few people at the top of the hierarchy, and the large group in the middle is responsible for management – management. In many ways, such perceptions are correct: this is why the concept still exists. But the reality of organizations thriving in a rapidly changing world increasingly looks different. How exactly, we tell you in this piece based on the book Strategies for Change.

Being a leader means setting a direction, formulating an image of the future, rallying people around this image and giving them motivation and inspiration for further action. Leadership mobilizes people, helping them to overcome significant barriers, to go through changes despite all the difficulties, and in some cases – to achieve truly amazing results.

Let us now contrast leadership with management. The latter is best defined as “a set of structures, rules and actions that enable systems of people and technology to work reliably and effectively despite the size of the structure, geographic distribution and other complicating factors.

One of the reasons corporations, governments, and other organizations have difficulty is that they often confuse management and leadership without realizing the difference between the two.

Management is often referred to as leadership, especially if it is done by people close to the top of the hierarchy.

Most modern organizations erect barriers to leadership at lower levels, and when someone still manages to show leadership qualities, they usually get another name: initiative, good management, high potential. But the definition of what leadership is in terms of behavior and achievement becomes quite clear if one reads the biographies of people whom historians have unanimously classified as great leaders.

In both cases, the change that happened because of them is so significant and the results achieved are so good that they are remembered even centuries later.

The best leaders created a halo of urgency around opportunity. They communicated their message to the masses, and many believed they, too, could benefit from the opportunities. They won hearts and minds with strategy and passion. They inspired a multitude of people to take coordinated action against various organizational and human barriers, fountaining positive energy and naming opportunities.

They made sure that successes happened quickly and often, and celebrated them widely, sustaining the overall excitement. And they also understood that maintaining a sense of urgency and a level of energy was necessary until the initiatives were successfully completed.

It is now becoming increasingly clear that great leaders avoided common pitfalls and mobilized others to action, not on an ad hoc basis, not once, but constantly, repeatedly, often over many years. The latest research shows that this is exactly what organizations need in this new era of speed, complexity and instability–like action, taken not once every ten years, but constantly.

The result of such activity is often staggering. Such leaders come to be seen as appealing, heroic, charismatic figures.

The cause-and-effect relationship, however, often goes in the opposite direction.

It is not so much that charm compels others to achieve astounding results, but rather that behavior based on an understanding of human nature, modern organizations and leadership in times of change mobilizes people and they get outstanding results despite all obstacles. It is these accomplishments that give the impression that the leader is a heroic and charismatic figure.

This last idea is crucial: It helps explain why organizations without bright leaders-that is, simply put, virtually all organizations-are also capable of achieving incredible results.

They can assemble diverse teams that trigger a very similar process of mobilization and lead others to make great change. Research on successful leadership in times of change shows that teams become drivers of large-scale change when they behave according to a set of guiding principles.

First, they hold both themselves and others accountable for completing “I must” tasks, but they also understand that an “I want” attitude-an emotionally positive, almost volunteer-like attitude-is vital to mobilizing people in times of rapid change.

Second, their approach is rational and analytical, but they win the hearts of others to achieve real enthusiasm and that very positive “I want” volunteer attitude.

Third, they are good managers and maximize the planning, organization, and control that modern organizations so desperately need. Now they have one more thing in common: they stimulate and support the leadership qualities of many employees, not only their colleagues – top managers.

Fourth, they use small, carefully selected teams for specific change tasks. But at the same time, they also count on a diverse team, a fairly large group that has enough information and contacts to determine what change is needed and how to achieve it, overcoming human nature and organizational barriers.

These four points can be considered guiding principles for accelerating change in complex organizations. They help set in motion a leadership process that inspires others to take action; that inspired action, in turn, generates new leaders who succeed in overcoming the new organizational and human factors that impede change and produce results.

From the book Strategies for Change.
Photo: source.

The post Leadership and Management in an Age of Change appeared first on Business.