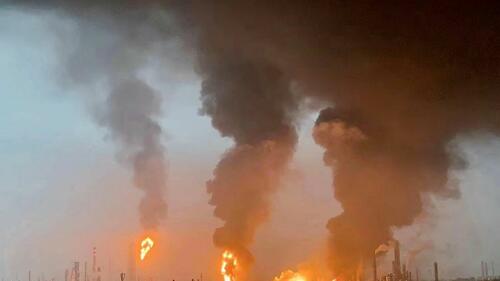 At least one person has been reported killed and more injured amid a massive fire that consumed a Shanghai ethylene glycol production plant. Large explosions were reported by eyewitnesses after a fire broke out at the plant, reportedly at around 4am local time.

Some five hours later, the Sinopec Shanghai Petrochemical Company said firefighters were able to successfully extinguish the blaze, the cause of which is as yet unknown and under investigation.

Video clip on Weibo shows a plant of SINOPEC Shanghai Petrochemical Company caught fire at around 4:00 am on June 18.
The group says the fire in glycol unit was under control.#China #OOTT pic.twitter.com/4OImLn51aQ

Some residents within the city’s Jinshan district, where the plant is located, said they were forced to flee due to the thick black smoke that engulfed the whole area. Local officials said the Shanghai Municipal Bureau of Ecology and Environment is monitoring air pollutants.

Chinese state media is citing a huge emergency response to gain control of the fire. “A total of 563 firefighters and rescuers and 113 fire engines rushed to the site, and the fire is under control,” Xinhua press agency wrote.

“A nearby shop owner, surnamed Sun, told Xinhua that after hearing the explosion in the early morning, he drove his family away because they were worried about the potential fallout and pollution,” the report continued.

The company in a Saturday afternoon statement (local time) said the fire has at this point been brought “under control.”

Subsequent overhead news footage as well as social media images showed a sizeable blaze which which cause thick black clouds to linger over the city.

Roughly an hour ago a large fire erupted at the Sinopec Shanghai Jinshan petrochemical complex in #China. pic.twitter.com/C88wMhxnLc

CNN notes that in the fire aftermath, “China has seen a spate of industrial accidents in recent years that have left scores dead, raising concerns about public safety.”

The report recalls that “In 2015, at least 173 people died after a series of explosions at a chemical warehouse in the northern port city of Tianjin.” And further, “Last October, at least three people were killed and more than 30 injured in a powerful explosion at a restaurant in the northeastern city of Shenyang. The gas explosion took place in a mixed-use residential and commercial building.”