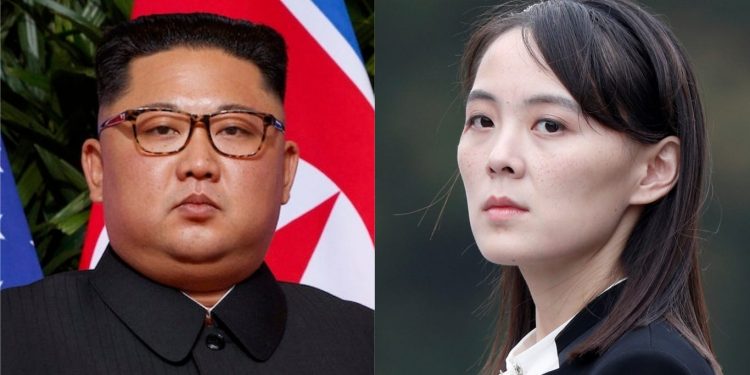 A composite image of North Korean leader Kim Jong Un and his sister Kim Yo Jong.

The sister of North Korean dictator Kim Jong Un has ridiculed the South Korean president as “simple” and told him to “shut his mouth” after he offered economic aid in exchange for nuclear disarmament.

Kim Yo Jong said that the proposal was “foolish,” adding South Korean President Yoon Suk Yeol “would have been more favorable for his image to shut his mouth, rather than talking nonsense,” according to a scathing statement published by state news agency KCNA, in what was Pyongyang’s official response to the offer.

Yoon is “really simple and still childish,” she said. “No one barters its destiny for corn cake,” said Kim.

“Bitter contempt is what we will only show those spinning a pipedream to succeed in making us abandon our nukes if they pay more stakes,” she said.

The statement comes as North Korea continues to face food shortages as a result of the COVID-19 pandemic.

“This attitude from North Korea will not only threaten peace on the Korean Peninsula but [it will also] result in further difficulties for the North by worsening its international isolation and economic situation,” said Lee, per The Telegraph reports.

However, they have not rescinded their offer.

South Korea’s offer of economic aid was first proposed in May. It included food, energy, and infrastructure support in return for North Korea banding its nuclear missile program – and Yoon presented it again on Wednesday as he marked 100 days in office, per Sky News.

Kim Yo Jong is considered to be one of the most influential people in North Korea. She made headlines in 2017 after she was promoted to the head of the propaganda department of the Workers’ Party of Korea.

Since then, she has only gained power and authority. Throughout the summer of 2020, Kim Yo Jong became the face of North Korean aggression, releasing several vitriolic public statements, including threats to South Korea and denouncements of North Korean defectors, whom she called”human scum.”