Kevin McCarthy said Trump ‘goes up and down with his anger’ toward others, comparing it to walking ‘the tightest tightrope’: book 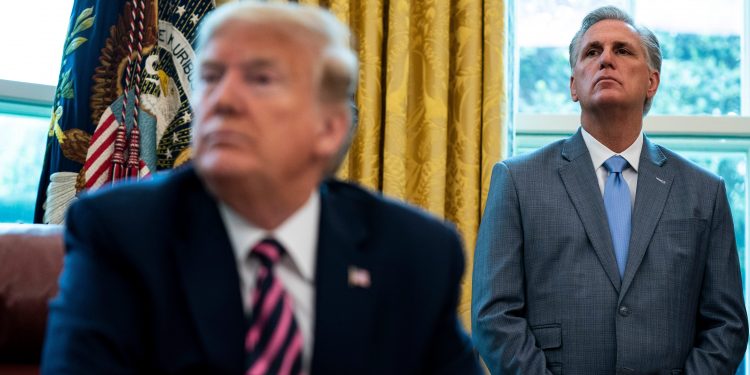 House Minority Leader Kevin McCarthy said former President Donald Trump “goes up and down with his anger” and compared the predicament to a “tightrope” that must be navigated, according to a newly-released book by Atlantic staff writer Mark Leibovich.

In the book, “Thank You for Your Servitude: Donald Trump’s Washington and the Price of Submission,” Leibovich wrote that McCarthy was a “pragmatic conservative” who sought to have a working relationship with Trump.

Leibovich and McCarthy spoke in July 2018, when the California Republican remarked on the complexities of Trump’s personality.

“He goes up and down with his anger,” McCarthy said.

He continued: “He’s mad at everybody one day. He’s mad at me one day. This is the tightest tightrope anyone has to walk.”

McCarthy was asked about Trump’s relationship with then-House Speaker Paul Ryan, the Wisconsin conservative who had been the party’s 2012 vice presidential nominee and was instrumental in advancing the party’s 2017 tax-cut bill.

He told Leibovich that Trump and Ryan were “just wired differently.” The former president felt that Ryan — who represented Wisconsin’s 1st congressional district from 1999 until 2019 — was not sufficiently complimentary of him, according to the book.

When Leibovich asked Ryan if he thought Ryan should have pushed back against Trump when he “offended” him, McCarthy was circumspect in his response.

“I think history will show that Paul spoke his own mind,” McCarthy said, per the book.

Ryan declined to run for reelection in 2018 and retired from the House in January 2019, midway through Trump’s term in the White House.