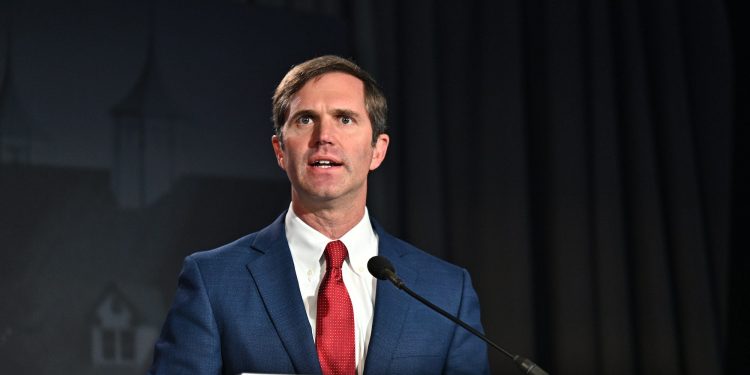 Democratic Gov. Andy Beshear of Kentucky speaks at an event in Lexington, KY on April 08, 2022.

Kentucky Democrats are reeling from President Joe Biden’s plan to appoint Chad Meredith, an anti-abortion Republican, to a lifetime federal judgeship in their state.

“If the president makes that nomination, it is indefensible,” said Democratic Gov. Andy Beshear at a press conference on Thursday. “This is an individual who aided and advised on the most egregious abuse of power by a governor in my lifetime.”

Beshear was referring to Meredith’s service as former Republican Gov. Matt Bevin’s deputy counsel, including when the governor issued a raft of controversial pardons — including of a man convicted of raping a child — at the end of his term in 2019.

“I don’t know how the President could say he’s for public safety if he makes this nomination,” said Bevin.

On Wednesday, the Louisville Courier-Journal first reported that Biden planned to make the nomination in an apparent deal with Senate Minority Leader Mitch McConnell, Kentucky’s senior senator. On Friday, a federal judge in the state announced her resignation, opening up a spot for Meredith’s appointment to the US District Court for the Eastern District of Kentucky.

But even more concerning for some Democrats is Meredith’s record on abortion, particularly in the wake of the Supreme Court overturning the constitutional right to an abortion last week.

Biden has said he would use all of his “appropriate lawful powers” to fight back against the ruling.

While working for Bevin’s office, Meredith defended an abortion law enacted in 2017 that required abortion doctors to perform an ultrasound and describe the image to the patient before performing the procedure.

Democratic Rep. John Yarmuth of Kentucky called the decision a “huge mistake” and said the planned nomination was “some kind of effort to appease Mitch McConnell, which is something this state and country should be very upset about.” Yarmuth’s office also confirmed to Insider that he’d been informed of the nomination by the White House.

Charles Booker, the party’s nominee for US Senate, went even further.

“The President is making a deal with the devil,” he wrote on Twitter. “This is some bullshit.”