Ken Griffin’s net worth jumps $6.5 billion after huge Citadel deal — making him the 3rd-richest person in finance with $28 billion 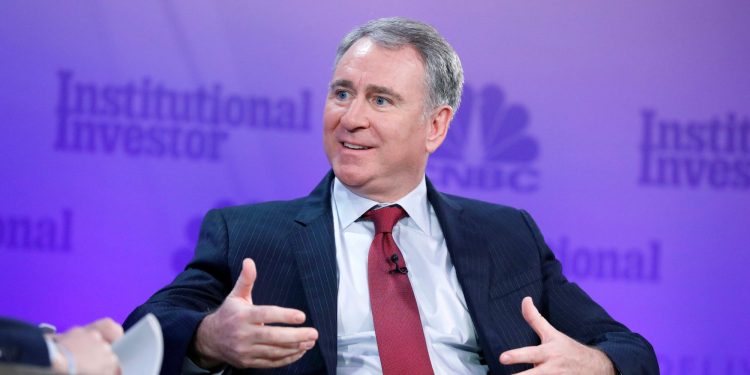 Citadel founder Ken Griffin’s net worth has jumped by $6.5 billion, making him the third-richest person in finance, following a deal to sell a stake in his market-making company to a pair of investment firms.

Citadel Securities is reportedly selling a $1.15 billion stake to Sequoia and Paradigm, valuing the market maker at around $22 billion. It is the company’s first outside investment.

Bloomberg and its Billionaires Index estimate that Griffin will own about 80% of the company after the sale, a stake worth $17.5 billion.

When his wealth from the Citadel hedge fund and other ventures is bundled in, Bloomberg reckons Griffin is worth $27.6 billion. That’s around $6.5 billion more than its previous estimate.

It puts Griffin third on the list of billionaires who made their money primarily through the finance industry, behind Binance founder Changpeng Zhao and Blackstone founder Stephen Schwarzman. But investors beyond Wall Street, such as Warren Buffett and Carlos Slim, rank higher in wealth.

Read more: A 23-year market veteran shares the 5 best pockets of the market to hide in during the growth stock bloodbath — and why inflation and Omicron fears are overblown

Griffin founded Citadel Securities in 2001 as a separate market-making business from his giant hedge fund Citadel.

It has since come to dominate the world of market-making, in which firms sit between buyers and sellers of stocks, creating liquidity and making money from price differentials.

The boom in amateur investing during the coronavirus crisis has been especially profitable for Citadel Securities, which says it executes 37% of all US retail trades.

The business found itself at the center of the GameStop frenzy in January 2021, when many retail investors accused Citadel Securities of pressuring Robinhood to suspend trading in the meme stock.

Yet expert witnesses, including Griffin, testified to Congress that Citadel Securities played no role in Robinhood’s move.

Griffin, a prominent collector, recently used some of his immense wealth to buy a copy of the US Constitution for $43.2 million in an auction at Sotheby’s. He outbid a group of crypto fans, known as ConstitutionDAO, who had put together money in an effort to buy the document.