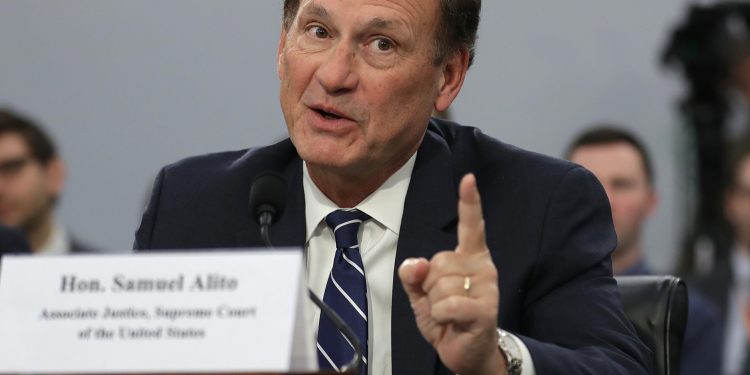 When US Senators questioned Samuel Alito at his confirmation hearing in 2006, the now-Supreme Court Justice, author of Friday’s decision to overturn Roe v. Wade, hinted that the landmark 1973 abortion ruling was an “important precedent.”

“It is a precedent that has now been on the books for several decades,” Alito said. “It has been challenged. It has been reaffirmed.”

At the same hearing, he talked about the principle of “stare decisis,” where Supreme Court justices respect the precedents set by previous decisions in making their rulings. He stopped short of calling it settled law, noting that Roe v. Wade, which established a nationwide right to abortion, was “involved in litigation now at all levels.”

In Friday’s majority opinion for Dobbs v. Jackson Women’s Health Organization, Alito wrote that the Roe v. Wade decision was “on a collision course with the Constitution from the day it was decided,” comparing it to the Supreme Court decision that upheld racial segregation laws. “Stare decisis is not an inexorable command,” he wrote in the majority opinion, and when properly applied, meant that Roe should be overturned, not upheld.

“Precedents should be respected, but sometimes the Court errs, and occasionally the Court issues an important decision that is egregiously wrong,” Alito wrote. “When that happens, stare decisis is not a straitjacket.”

That the right-wing Supreme Court majority would overturn a 50-year precedent many Americans took for granted raises questions of how far they’d go to overturn other cases that have become priorities for right-wing activists.

Justice Clarence Thomas, in a concurring opinion, said the court should “reconsider” rulings that protect contraception access and same-sex marriage. Like Roe v. Wade, those decisions were also based on privacy rights under the 14th Amendment of the Constitution.

Alito’s opinion spends more than 25 pages explaining why he believes Roe v. Wade and Planned Parenthood v. Casey, a later landmark Supreme Court decision that upheld Roe, should not be protected under the principle of stare decisis. In his view, those earlier decisions were poorly reasoned, were based on misreadings of history, and clashed with other parts of the law. He says any “fear that our decision will imperil” rights to contraception access, same-sex marriage, and sex with members of the same sex were “unfounded.”

Abortion-rights activists hold signs during a Mothers Day demonstration outside the Supreme Court in Washington, DC.

Jennifer Mascott — a former clerk for Justices Clarence Thomas and Brett Kavanaugh, who both signed onto Alito’s opinion — told Insider that the majority of justices believed the precedents set by Roe simply weren’t workable.

“If a past decision was egregiously wrong and its reasoning is causing there to then be mistakes stretched beyond the opinion and cause other areas of the law to become distorted, then that’s yet another reason to get it off the books, so that it doesn’t continue to distort other areas of law,” Mascott, now a professor at the Antonin Scalia Law School, told Insider. “And so the Court finds all of those factors here.”

Those changes — and other tweaks over the past 50 years — indicated Roe v. Wade wasn’t a good candidate for protection under the principles of stare decisis, Mascott said.

“The fact that it has to keep changing its justification suggests maybe there wasn’t a clear constitutional basis for the right in first place,” Mascott said. “The Court today is not just directly overruling Roe — there have been decades of shifts and changes in the abortion framework and the case law.”

In overturning Roe v. Wade and Planned Parenthood v. Casey, Friday’s decision ends most nationwide abortion protections and now leaves them up to the states.

“None of those factors apply here: Nothing — and in particular, no significant legal or factual change — supports overturning a half-century of settled law giving women control over their reproductive lives,” Justices Stephen Breyer, Sonia Sotomayor, and Elena Kagan wrote.

U.S. Supreme Court associate justices Samuel Alito (L) and Elana Kagan testify about the court’s budget during a hearing of the House Appropriations Committee’s Financial Services and General Government Subcommittee March 07, 2019 in Washington, DC. Members of the subcommittee asked the justices about court security, televising oral arguments and codes of ethics for the court.

Instead, they wrote, the majority only overruled Roe and Casey because of former President Donald Trump’s right-wing appointees.

“The Court reverses course today for one reason and one reason only: because the composition of this Court has changed,” they wrote.

In taking account of the precedent set by Roe v. Wade, the liberal justices talked about the practical effects it had on people’s lives. Linda McClain, a professor of gender and legal theory at Boston University, said it was a “vast gulf” with the near-absence of any such discussion over the subject in the majority opinion.

There is almost no discussion in the majority opinion, McClain said, about how women live their lives and the “toll” a pregnancy — viable or not — can take on the body. Friday’s decision leaves it up to individual states.

“It’s still the case that many pregnancies are unplanned, there’s complications from pregnancy, and childbirth can be dangerous to women,” she said. “There was just a total absence of focus on women in the majority opinion.”