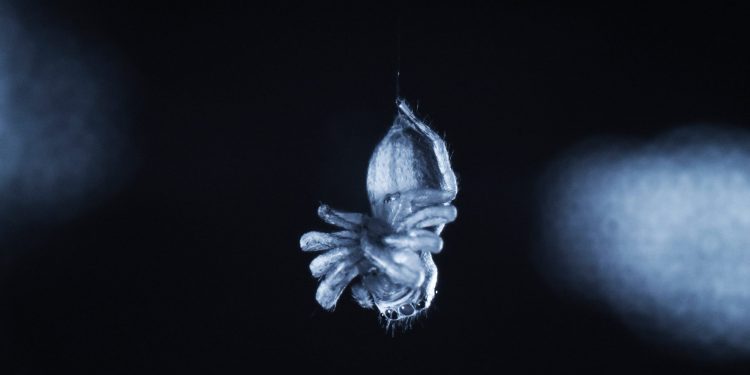 Jumping spiders may enter a REM sleep-like state similar to humans, a new study suggests, prompting experts to theorize what they can experience in such a paralyzed state.

Roessler told The Washington Post that she noticed the spiders were “hanging really neatly, super exposed, not in a silk retreat” and were mostly still, puzzling researchers involved in the study.

“It was just the most unusual thing I’ve ever seen,” Roessler told the Associated Press of the immobilized and largely vulnerable creatures.

The footage revealed behavioral patterns in the baby spiders that largely resembled a REM (retinal eye movement) sleep-like state: twitching legs and shaking “retinal tubes,” a part of the spider’s eye which allows its eyes to move and was visible through the jumping spider’s translucent exterior. REM sleep has also been linked to dreaming due to the high brain activity that is observed in humans and other mammals, like cats and dogs.

“These twitches seemed so classical, and they immediately reminded me of a dog dreaming,” Roessler, who is also a behavioral ecologist at the University of Konstanz in Germany, told The Post.

“Whether that means that they’re visually experiencing this similar to how we experience visual dreams is a completely different story,” Roessler continued.

Prior to the study, Roessler told The Post that little was understood about spiders’ sleep patterns — or about REM sleep in mammals, birds, or other creatures as a whole — but she and her colleagues plan to test if the spiders’ REM sleep-like state is actually sleep by scientific terms, and what benefits the creatures could reap from entering such a state.

“The assumption is more like they just take little rests during the day or … whenever they’re active,” Roessler said. “But I don’t think there was such a clear idea if they actually sleep during some extended period of time.”

Lisa Taylor, a research scientist at the University of Florida focusing on jumping spider behavior, told The Post that jumping spiders, in particular, are extraordinarily complex creatures, both in their sensory functions and cognitive abilities.

“They’re not little robots that go out and attack anything that they see,” Taylor said. “There’s a lot going on in their brains as they’re making decisions about whether to attack one thing over another.”

“So whether something that happens at night plays a role in that is particularly interesting,” she added.

One expert is doubtful that it could actually be REM sleep.

“There may be animals that have activity in quiet states,” Siegel, a researcher with the UCLA Center for Sleep Research who was not involved with the study, told the AP. “But are they REM sleep? It’s hard to imagine that they could be the same thing.”