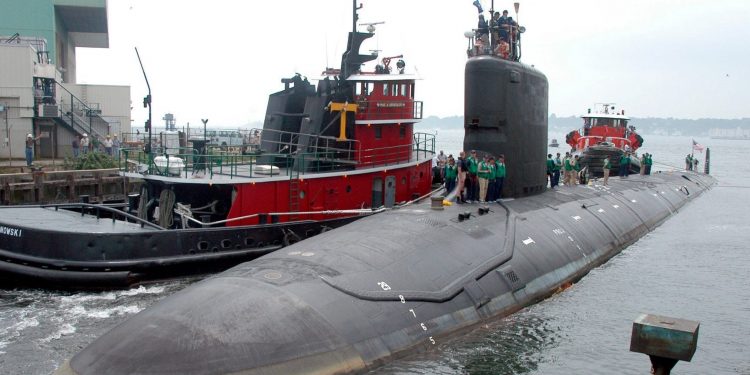 In this Friday, July 30, 2004 file photo, the U.S.S. Virginia returns to the Electric Boat Shipyard in Groton Conn., after its first sea trials.

At a sentencing hearing Tuesday, a federal judge tossed out the plea agreements for a Maryland couple accused of trying to sell US submarine secrets to a foreign country.

Federal District Court Judge Gina Groh for the Northern District of West Virginia said that the proposed sentences for Jonathan and Diana Toebbe were not nearly harsh enough given the nature of the offenses and “not in the best interest” of the US, the Baltimore Sun reported.

Commenting on the proposed sentence for Diana, Groh said “there are lower-level drug dealers that go to prison for way longer than 36 months,” according to The New York Times.

The Toebbes were arrested in October 2021 after a year-long FBI sting operation and charged with one count of “conspiracy to communicate restricted data” and two counts of “communication of restricted data.”

Because Jonathan worked for the Navy, he had a national security clearance and could access sensitive material, the Justice Department said.

Prosecutors have alleged that Jonathan, with the help of his wife, attempted to sell “restricted data” about nuclear-powered submarines to someone the couple believed was agent of an unidentified foreign state, the Justice Department said in a statement at the time of their arrest.

In reality, the individual with which the couple was communicating was an undercover FBI agent who sent Jonathan thousands of dollars in cryptocurrency in exchange for the sensitive information, according to prosecutors.

According to court documents, prosecutors alleged that at multiple points during the FBI sting operation, the couple traveled to West Virginia to leave information for the undercover agent at a “dead drop location.”

In the wake of Tuesday’s ruling, the couple withdrew their earlier guilty pleas, CBS News reported. The case will head to trial early next year.