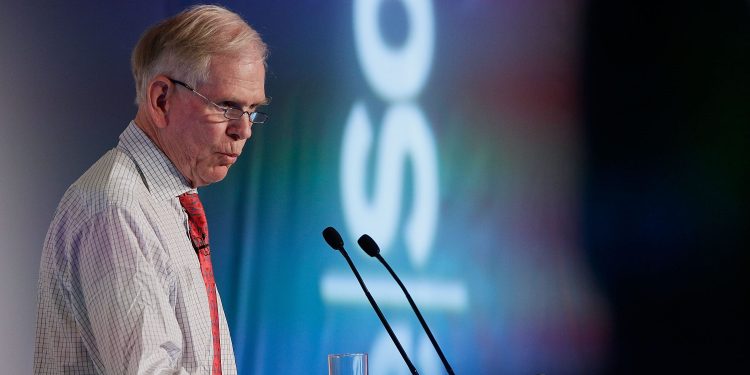 Jeremy Grantham is a famed investor and historian of stock markets.

Jeremy Grantham of GMO believes the stock market is in a bubble akin to 2000 that is in the process of deflating, according to a Wednesday interview with CNBC.

On the surface, the current stock market looks similar to the 2000 dot-com bubble given that much of the damage has been concentrated in US tech stocks.

“This bubble superficially looks very much like 2000, focused on US tech, led by Nasdaq going to incredible highs, with the opening weakness in Nasdaq, which started to fall along with the Russell 2000 long before the S&P [500] did,” Grantham said.

But there are a couple of serious differences between the 2000 dot-com bubble and today’s stock market that scare Grantham.

“What I fear is that there are a couple of differences with 2000 that are more serious. One of them is that 2000 was exclusively in US stocks, the bonds were great, the yields were terrific, housing was cheap [and] commodities were well behaved,” Grantham said, adding that in comparison to today, 2000 “was paradise.”

But commodity prices going through the roof as Russia continues its war against Ukraine, and the fact that raising interest rates from a floor of almost 0% translates into a lot of pain for the bond market.

“What you never want to do in a bubble is mess with housing, and we’re selling at a higher multiple of family income than we did at the top of the so-called housing bubble in 2006. In addition, the bond market recently had the lowest lows in 6,000 years of history. In addition, energy [prices] prices have pushed up, [and] metals and food prices are actually on the UN index higher than they have ever been before in real terms,” Grantham said.

“So we are really messing with all of the assets so this has turned out historically to be very dangerous,” Grantham added, pointing to similarities between today and Japan’s massive asset bubble in the late 1980s. Japanese stocks have yet to reclaim the high seen at their peak in 1989.

And while investors are keen to hunt for opportunities in the stock market given that valuations have hit levels not seen in years, Grantham preaches caution, highlighting that the estimated profit margins at most companies will deteriorate as an economic recession materializes.

“The first thing to go in a recession is profit margins, and that is very likely to happen this time. We should be in some sort of recession pretty quickly.”

That scenario is playing out in retail earnings this week, with both Walmart and Target forecasting an increase in input costs and lower profit margins because of it.

What’s even more dire is the potential for Grantham’s forecasted recession to morph into something like the 1970’s, where economic growth slows and inflation persists.