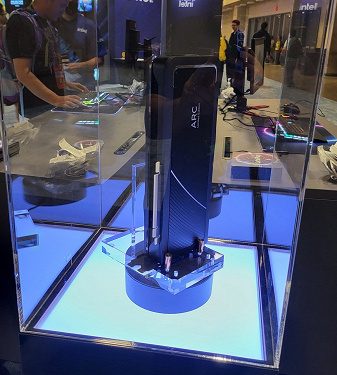 As part of the Intel Extreme Masters 2022 tournament, which started today in Dallas, USA, Intel seems to have decided to showcase its highly anticipated Arc Alchemist desktop graphics card. There hasn’t been an official announcement yet, but the card itself was able to be photographed by attendees.

It’s a dual-fan model, though it’s not yet clear which one exactly. It is assumed that we are talking about Arc A770 or Arc A780. Either way, it’s a senior model, as indicated by the configuration of the power connectors – 8 and 6 pins. It is also assumed that the card has 16 GB of video memory.

As a processor, it is likely to use the ACM-G10 chip with 32 cores Xe. This flagship Arc model is expected to compete with the Radeon RX 6700 and GeForce RTX 3070, although it is not yet known when it will hit the market at least as part of OEM builds.