Inside Ukraine’s Foreign Legion: The veterans, glory-seekers, and accidental social media stars who have gone to war against Russia 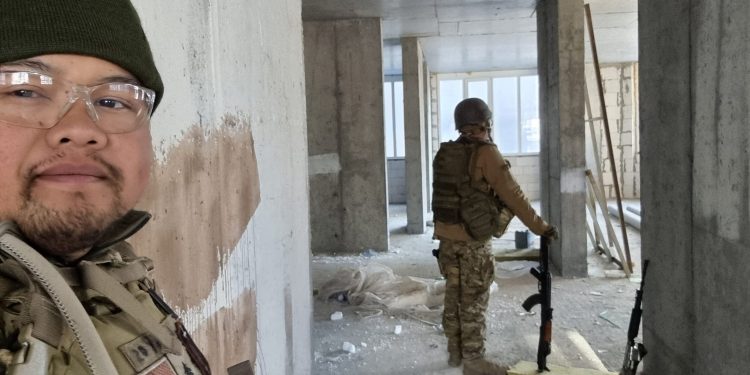 Hieu Le volunteering in Ukraine as part of the Foreign Legion.

Although there are no official figures, in early March, The Ukrainian Defense Ministry said that around 20,000 foreign fighters from 52 countries had volunteered.  Some 3,000 US citizens reportedly volunteered.

One US volunteer, James Vasquez, 47, an army veteran and home renovation contractor from Connecticut, has been live-tweeting his experiences on the ground, gaining over 250,000 followers in just a few weeks.

In his viral updates, Vasquez has described “taking out” Russian tanks and liberating a Ukrainian village occupied by Russian forces.

Reporter Nolan Peterson, based in Ukraine, corroborated claims that Foreign Legion fighters helped to liberate the city of Irpin.

But among the stories of courage and combat, accounts have emerged of Foreign Legion volunteers leaving Ukraine traumatized and disillusioned.

These fighters cited various issues on the ground, including a lack of organization and equipment, and the questionable quality and motivation of some of the other volunteers.

Hieu Le, 30, a Vietnamese-American veteran from California who previously served in Afghanistan, documented his journey in joining the Foreign Legion on Facebook.

Le said he decided to leave just two weeks after arriving in Ukraine, due to the traumatic death of a fellow fighter and some negative experiences with other volunteers.

Hieu Le volunteering for the Foreign Legion in Ukraine.

While commending the Ukrainian resistance and most of the other Legionnaires, Le said that a minority of unruly fighters were causing trouble.

“Among the many volunteers who come with good intentions in their hearts are those who only come to satisfy a sadistic need to kill and feed their egos,” Le wrote on Facebook.

Le said that some of these “unhinged” Legionnaires claimed to be Special Forces but spent their time provoking fights with other volunteers and being “high on amphetamines, testosterone, steroids.”

Another volunteer from Le’s unit, a Polish veteran named Adam, backed up some of Le’s claims in an interview with Vice News.

Le further claimed that he had heard rumors about these fighters going out on missions drunk, looting homes and shooting lost dogs.

“Given the criminal and lawless nature of other groups of legionnaires my team was forced to live with, it was better to leave before I was implicated in any of their war crimes,” Le wrote on Facebook.

Insider reached out to Hieu Le for an interview but he said he did not want to keep reliving the negative memories. Insider was unable to independently verify Le’s claims.

Hieu Le and other foreign fighters in Ukraine.

Other experts and volunteers working with the Foreign Legion have reported concerns about the caliber and motives of some of the volunteers.

Military news publication Task and Purpose reported that among the initial intake of Foreign Legion fighters there was “a swarm of fantasists for everyone candidate with experience in combat.”

Harrison Jozefowicz, the founder of volunteer group Task Force Yankee Ukraine, which helps army veterans join the Foreign Legion, told Canadian outlet Global News that about 55% of their recruits are rejected due to inexperience or questionable motives.

Many of these volunteers appeared to be “glory-seekers” motivated by a desire to gain clout on social media, he said.

Ukrainian officials have become more discerning about which volunteers they will accept, asking candidates to disclose their previous combat experience on online application forms.

“Our main priority is combat experience and all of them have to understand their role and place,” Anton Myronovych, a spokesperson for Ukraine’s Armed Forces, told Global News.

“We don’t need mercenaries who think they may make some money or something like that.”

Multiple outlets reported that a Russian missile attack on the Yavoriv training base near Lviv on March 13, where many Foreign Legion fighters are housed, succeeded in weeding out those unprepared for the realities of war.

Corporal Damien Magrou, a Foreign Legion spokesperson, told Global News that many fighters were so shocked by the carnage of the bombardment, which killed at least 35 Ukrainian soldiers and an unknown number of foreign fighters, that they chose to leave as soon as possible.

The Yavoriv military base after being attacked by Russian forces on 13 March 2022.

Even experienced military veterans who joined the Foreign Legion have left feeling disenchanted, saying they were ill-equipped and unprepared for the brutality of the war.

The Ukrainian military has repeatedly requested Western allies to send much-needed weapons and equipment which they are lacking, and Foreign Legion fighters have echoed this.

Amidst his chipper updates from the front lines, James Vasquez has also asked his followers for donations to help purchase equipment for Ukrainian forces.

Some Canadian fighters similarly told the Globe and Mail that they had decided to leave the Foreign Legion due to a lack of equipment as well as the requirement to sign contracts committing themselves to the war.

The concerns about having to sign indefinite contracts have been echoed by other fighters, as reported by The Economist’s 1843 Magazine.

Hieu Le, who was reportedly running a noddle stand in Colombia when he was inspired by Zelenskyy’s appeal to defend Ukraine, told Vice News that although the Ukrainian resistance was “impressive,” there was a lack of top-down organization among the Foreign Legion, leading to unnecessary casualties.

He suggested having a Ukrainian officer embedded in each Foreign Legion unit to help remedy this.

Even battle-hardened veterans of Afghanistan have found fighting the Russian army to much to handle. Hieu Le and Polish volunteer Adam told Vice News that their previous combat experience had not prepared them for the “asymmetric nature of warfare in Ukraine.”

“Even those with military experience, you’ve got to realize that there isn’t a war that has been fought like this in a long time,” Le told Vice News.

“What’s different with the US military and all the other NATO militaries—they’re spoiled. When it comes to fighting a war, they have air support, medivac, logistics, all kinds of different levels of intelligence, and support. Here in Ukraine, we had none of that,” he said.

Adam, a 35-year-old Polish carpenter who served one tour in Afghanistan, told the outlet that going to Afghanistan would be a “vacation” compared to what he experienced in Ukraine.