If not Trump v. Biden in 2024, then who? Here are the politicians showing signs they could be in the mix 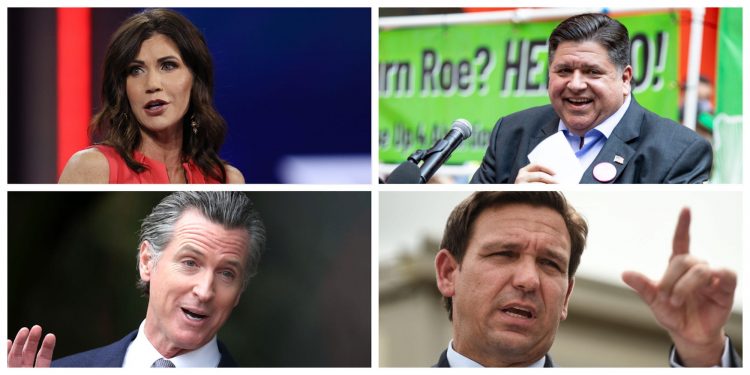 Jockeying over the 2024 presidential election has begun even before the 2022 midterms are done and dusted.

California Gov. Gavin Newsom is picking fights with Florida Gov. Ron DeSantis. DeSantis and Virginia Gov. Glenn Youngkin are meeting with donors. And more than a dozen politicians have flocked to the first primary state of New Hampshire.

Potential presidential hopefuls aren’t waiting to lay the groundwork for themselves on the national stage, even as parties await official paperwork from President Joe Biden and former President Donald Trump, who have both indicated plans to run.

Will Sen. Ted Cruz of Texas, the runner up for the 2016 GOP nomination, give it another shot?

Plans for many of those viewed as contenders are contingent upon decisions from Biden and Trump. But they’re still making all the usual moves.

If there isn’t a Biden-Trump matchup, here are the people showing signs they could be in the 2024 mix:

Florida’s governor, a former US House member and founding member of the conservative House Freedom Caucus, has been portrayed as a MAGA star who could replace Trump. He has already beaten Trump in conservative straw polls.

DeSantis has become a leader in Republican culture wars, backing measures that include a 15-week abortion ban that’s been blocked by a Florida judge and the “don’t say gay” law, which bans classroom instruction on sexual orientation or gender identity in grades K-3 “or in a manner that is not age appropriate or developmentally appropriate.” He’s also banned math books on the basis of “critical race theory.”

DeSantis is a proven fundraiser with more than $100 million for his gubernatorial reelection campaign, and CNBC reports that he’s headed to a private fundraiser later this month in Utah.

As the only two of Biden’s rivals from the 2020 primary to end up with jobs in the administration, Buttigieg and Harris are the clear heirs apparent should Biden bow out.

Harris has been viewed in this context ever since her historic pick as Biden’s VP nominee, while Buttigieg’s early dropout and subsequent endorsement of Biden kept him and many of his staffers in the good graces of the Biden camp.

Neither have been popping up to New Hampshire or Iowa outside of their official duties, but their standing in Biden’s cabinet makes them early favorites for whenever the next competitive Democratic primary takes place.

Starting with his first speech since the January 6 insurrection, Pence, speaking to a crowd in Manchester, New Hampshire, began distancing himself from Trump’s election fraud lies while still touting the accomplishments of what he describes as “the Trump-Pence administration.”

Unlike some other Republicans, Pence has never indicated that he will hold off on declaring a run until Trump makes a decision.

Democratic Gov. J.B. Pritzker of Illinois has been testing the waters in New Hampshire and slowly building his national brand through both conventional and unconventional channels, particularly in the form of memes.

Hailing from California, Pritzker has an estimated net worth of $3.6 billion as part of the family that owns the Hyatt hotel chain, Royal Caribbean cruises, and several other major assets. He first won election in 2018 and did not hold any other political office beforehand.

The governor joined the New Hampshire Democrats’ convention in June. He also has an unofficial army of young people who enjoy making memes of Pritzker. They identify as the “Pritzker Pals.”

The Lone Star State’s junior senator, who drew widespread criticism for dashing off to a Mexican resort during a massive Texas power outage, came close to becoming 2016 GOP nominee with the backing of his conservative coalition.

He later became a Trump loyalist, despite their savaging of each other in 2016, and was a leader among those on January 6, 2021, who objected to certifying Biden as the next president. But those ties may be unraveling. While stumping for Rep. Mo Brooks in Alabama, Cruz mocked Republicans who say, “I have Donald Trump tattooed on my rear end!”

Last year, Cruz told the conservative outlet Truth Gazette that he would “absolutely” run for president again “in a heartbeat,” calling his 2016 run “the most fun I’ve ever had in my life.”

The Democratic Michigan governor’s profile rose substantially in 2020 as she took on a Republican-controlled legislature over COVID-19 restrictions, and she became a key surrogate for the Biden campaign in the crucial swing state.

Having already won statewide in the Great Lakes state, which is important in the Electoral College for Democrats, Whitmer has been identified by some beltway insiders as a potential 2024 contender if Biden sits out the race.

While she hasn’t been gallivanting around Iowa or New Hampshire, Whitmer did notably refrain from saying whether Biden should run for reelection in a June interview with NBC News.

Republicans have looked to the Virginia governor’s 2019 campaign for midterm inspiration after he beat former Gov. Terry McAuliffe while elevating the issue of parental rights in education.

Youngkin, a former co-chief executive of The Carlyle Group, met privately with GOP megadonors in Manhattan last month, The Washington Post reported, and has launched new political groups ahead of the midterms. He has said he has “not made a decision” on a presidential bid.

The California progressive, who previously served as San Francisco’s mayor, survived an election to recall him as governor in September and has since emerged as a leading combative voice against DeSantis and conservatism.

He invited Floridians to California, “where we still believe in freedom,” in a $105,000 ad buy over the July 4 weekend, fueling national speculation about whether he’s considering his own 2024 bid. The taunt drew a response from a DeSantis campaign spokesman, who said Newsom “might as well light a pile of cash on fire.”

Newsom was criticized in 2020 for attending a dinner at the exclusive restaurant, The French Laundry, while discouraging gatherings during California’s coronavirus surge.

He was once married to Kimberly Guilfoyle, who is now engaged to Donald Trump Jr.

Senator Tom Cotton (R-AR) during questioning of Supreme Court nominee Judge Ketanji Brown Jackson on the second day of her confirmation hearing before the Senate Judiciary Committee on Capitol Hill on Tuesday, March 22, 2022 in Washington, DC.

The Arkansas Republican senator and former US Army officer is reliably conservative and was considered an ally of Trump’s. However he opposed attempts to overturn the 2020 presidential election and called on Trump on January 6, 2021, to accept the results, “quit misleading the American people, and repudiate mob violence.”

Cotton has made multiple trips to Iowa and New Hampshire — Insider tracked him on one of them a couple weeks before the 2020 election — and met with donors last month to discuss potential 2024 plans, telling them that he would not be deterred from running even if Trump enters the race, POLITICO reported.

The Vermont independent and two-time Democratic presidential candidate has described the likelihood of a third run as “very, very slim.” But don’t count him out yet.

Sanders, a democratic socialist known for rattling the party’s establishment, “has not ruled out another run for president” in the event of an open 2024 Democratic presidential primary, according to a top Sanders advisor’s memo that was shared with The Washington Post in April. He was in Iowa in June to rally support for United Auto Workers, who were on strike.

If Sanders wins the White House, he will be 83 by Inauguration Day 2025, just a year older than Biden would be.

Scott’s ultra-conservative plan to “Rescue America” in March drew the ire of Republicans and became a campaign talking point for Democrats, who pointed to Scott’s goal of forcing millions of low- and middle-income Americans currently exempt from income taxes to pay up so “they have skin in the game.” Biden has called it the “ultra-MAGA” agenda.

The former Florida governor, who chairs the Senate Republicans’ campaign arm, was the featured speaker at a GOP event in Sullivan County, New Hampshire, in May. The speech stirred 2024 speculation, even though Scott says he’s running for re-election to the Senate.

South Dakota’s governor is another Republican leader who has embraced culture war issues, working to promote prayer in schools and gun rights, ban transgender women and girls from female sports, and prohibit the teaching of critical race theory.

The former member of Congress, who was elected governor in 2018, is out with an ad introducing her personal story and a new book, “Not My First Rodeo: Lessons From the Heartland.” Last year, her campaign registered a federal political action committee, the Noem Victory Fund, in another sign of national ambitions.

South Carolina’s junior senator is the chamber’s only Black Republican and the first Black senator from the south since Reconstruction. He has been making the rounds in New Hampshire and Iowa, generating buzz about possible presidential ambitions.

When Trump was president, Scott was a reliable ally on issues such as school choice and economic development in distressed communities.

Scott indicated in February that he would be open to being Trump’s running mate in 2024, though he said he’s “not looking” for a place on a ticket. “I think everybody wants to be on President Trump’s bandwagon, without any question,” he said on Fox News, adding that he told Trump that “he gets to decide the future of our party and our country because he still is still the loudest voice.”

Christie, the former Republican governor from New Jersey and an occasional figure in Trumpworld, spoke at a staple of the New Hampshire primary in March.

At Saint Anselm College’s “Politics & Eggs” event — one of the most common first stops for candidates before they officially become candidates — Christie criticized Trump’s inaction on January 6.

Trump’s former secretary of state has been a fixture on Fox News and given interviews about his weight loss, while still finding time to make a handful of trips to Iowa and New Hampshire starting in 2021.

Pompeo has been far less critical of Trump compared to the likes of Pence and Christie. Privately, however, he was one of several cabinet officials who discussed removing Trump from office following the insurrection.

The former United Nations ambassador under Trump came out with a book before the end of his first term and made an early trip to New Hampshire in 2020.

Haley made endorsements in the Granite State in February 2021 and networked with local lawmakers in April, but also said she won’t run if Trump does.

Haley revised that conditional statement in a late June trip to Iowa, where she said she’ll jump in the race “if there’s a place for me,” dodging a question on whether that depended on Trump’s decision.