I tried BeReal, the ‘anti-social media’ app that gives users 2 minutes a day to post candid and unfiltered photos, and discovered I like it more than Instagram 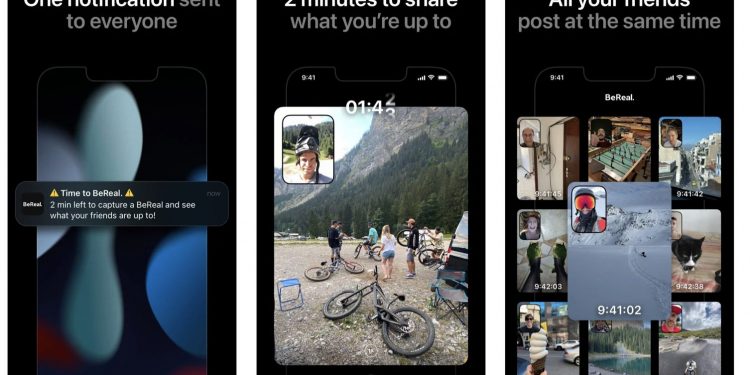 When I asked my friends why they post daily photos on BeReal, a new social media app that’s become increasingly popular among the college crowd, one replied simply: “It’s fun.”

Once a day, at random times, users receive a notification that they have two minutes to snap a candid photo and post it to the BeReal feed.

It’s a different type of selfie than you’re used to. Both the back and front cameras take pictures simultaneously, making it harder to curate the perfect frame.

That’s the whole point of the app. True to the name, there are no filters, limited retakes, and no time to pose. My posts have alternated between tired-eye selfies at work to blurry images of watching a basketball game with friends.

I tried out BeReal for three weeks to figure out why the social media newbie has been quietly creeping up the app store ranks. After getting through an awkward adjustment period, it’s become my new favorite way to keep up with friends.

My BeReal photos are a mix of fun selfies and boring snapshots, like this photo from a chaotic Amtrak trip on the right.

The last time I posted on Instagram was December 9. For the past year, my timeline has been caught in the flux of “casual Instagram” (fake candid photos that are unaesthetically aesthetic) and influencer territory.

Especially in a city like New York, I find it personally exhausting to continuously post on social media. Stories are slightly better thanks to their impermanence, but really only show off the highlight reels of my life.

BeReal is so much the opposite that it’s a different kind of intimidating. Do I really want everyone to see my pajamas? Am I confident enough to show everyone an awkward, poorly lit selfie? To expose the corners of my messy room and unmade bed?

Those worries were mainly eased by the fact that I currently don’t have any distant relatives or random acquaintances as friends on the app. While I have just over 1,000 followers on Instagram, I only have 26 friends on BeReal, and I’d like it to stay that way.

It’s not perfect by any means, but as my friend said, it’s fun. I get to see daily photos of my friend from California who is otherwise a social media ghost, and while my feed is pretty boring during the work week, it normalizes that most people who aren’t influencers have 9-to-5 desk jobs.

Scattered between posts about the minutia of the week are also raw snippets of enjoyment. A walk with friends, dinner with family, playing with a pet. But my favorite part is that I barely spend any time on the app. Two minutes to post, five minutes to scroll, all without the risk of harming your mental state — a danger apps like Instagram have been proven to exacerbate.

Most days, I miss the actual 2-minute window BeReal gives you to post because I wasn’t on my phone at that exact time. That doesn’t mean you can’t post that day — your photo will just include how many hours late you took it.

At first, this seems like a shame tactic for missing the “real” window for a spontaneous candid. But most people don’t actually post at that exact time, and I don’t think anyone cares how “late” your photo is.

One other strange detail is that your friends can view how many times you retook the photo, even if it was just to exclude the details of your inbox caught by the back camera.

Sometimes, I didn’t want to post another picture at my desk, especially when I have something fun planned later in the day that I’d prefer to share. It’s totally possible to choose when to post, but I weirdly felt guilty if I knowingly skipped the allotted “BeReal” time for a more attractive window.

It makes sense that college students especially love this app. They have much more free time, are constantly with friends, and are able to avoid most depressing reminders of the daily grind in their feed.

Ultimately, I don’t think it will become as popular as its social media counterparts because it’s not super addicting. But at least until the influencers take over, I’d choose BeReal over suffering through another faux-casual Instagram carousel any day.