I survived a school shooting and helped organize the first March for Our Lives 4 years ago. We’re demonstrating again tomorrow — here’s how we can all unite to prevent this from happening again. 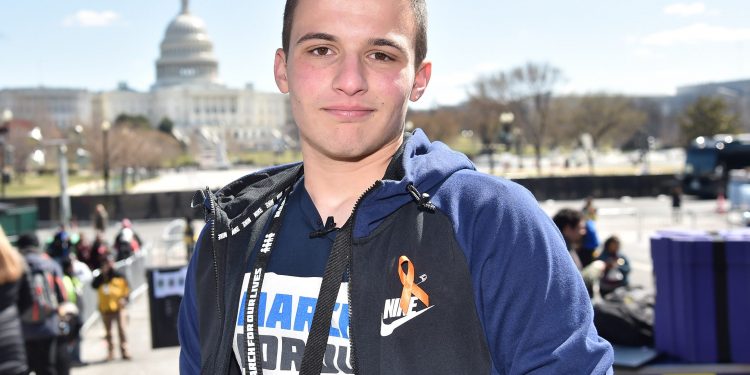 Cameron Kasky at the first March For Our Lives.

I survived the school shooting that killed 17 people and injured 17 more at Marjory Stoneman Douglas in Parkland, Florida in 2018.

When it happened, I was still a kid questioning my sexuality and trying to sort out who I wanted to be as a person. We all had our own stuff going on before someone decided to murder everyone.

And I don’t know who I would have been if this hadn’t happened.

The shooting follows me wherever I go

When I got into college,  I went to parties with friends and thought to myself, “I’m 18. I’m at a college party. I’m talking to people. Am I normal for a minute?” After years of being a “Parkland kid,” suddenly, I was just Cam.

But then someone would ask me, “Hey, random question for you. Did you know the shooter?”

And that’s when I realized — I’ll probably never be able to go places without someone hearing about what’s happened to me and unintentionally making some sort of comment that brings me right back to the trauma.

School shootings follow you in your mind in the places you least expect. And I have so much respect for the Parkland kids who stayed super involved by registering thousands of voters.

I was involved for a bit, too — I helped plan the first March for Our Lives demonstration in 2018. We drew hundreds of thousands to Washington, DC to protest gun violence and end mass shootings once and for all. Celebrities like George Clooney and Ariana Grande came to show their support, and more than 800 satellite marches sprung up all around the world on the same day.

Even Ariana Grande made it to the march.

But I couldn’t stay involved without losing my mind. It was really damaging to my mental health so I had to leave the organization.

This march is in response to the shooting that killed more than 20 kids in Uvalde, Texas. When my high school friend reached out to tell me about the second demonstration, I looked for every reason and excuse to avoid it.

I was conflicted. The first march, I went on a tour around the country to meet victims of gun violence and people who lost their family members. In some open carry states, I saw people carrying the same AR-15 that was used to kill my classmates, and I just fell apart.

Being so involved took a toll on me psychologically. I’m bipolar and have some personality disorders, too, and it took me a really long time to recover after the tour.

Yet here I am, talking about something I hoped would never happen again and showing up to demonstrate. It makes me feel like we failed when we organized the first march four years ago.

But here are some ways I think other people can help out to raise awareness and make a difference.

At the moment, we’re just trying to get as many people as we can to show up for the march. As of last week, more than 400 marches are set to take place in cities nationwide tomorrow on June 11, 2022, with the main one happening in Washington, DC. We’ve already received more than 50,000 RSVPs, and expect the number will continue to go up.

3. Advocate for reform to your senators and representatives

We have to tell our senators and congressional representatives that we’re not going to tolerate anything short of meaningful change.

House Speaker Nancy Pelosi and the entire Democratic House caucus are stepping up on gun violence right now in a very substantial way. It has actually really surprised me.

4. Fight for change at the local level

Parents need to organize in a way that disrupts local government — they should be attending school board meetings and speaking out on how we need the budget to expand the presence of school resource officers, and to step up mental health support services for students. These actions at the local level can work their way all the way to the top.

I’m a school shooting survivor, and it’s not something I can run from. I still get calls to do interviews and to talk about it on Twitter or at conferences. So I’m staying involved and helping out as much as I can. I’m getting the word out on social media and I plan to attend the local march in Los Angeles.

I really hope we don’t ever have to march again. And although the fight is worth it, it sometimes feels hopeless.