How Wall Street is responding to the end of Roe v. Wade 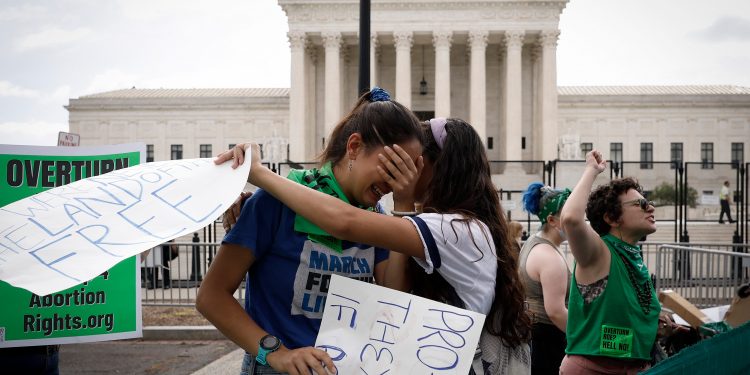 Some of the largest US banks responded on Friday to the US Supreme Court’s decision to overturn Roe v. Wade, in some cases telling their employees that they would cover costs if they must travel to seek abortion care.

Bank of America, Goldman Sachs, and Citi sent emails to employees addressing the court’s decision that ends the constitutional right to an abortion, according to memos viewed by Insider. JPMorgan, the largest US bank, said in a memo to employees that it would pay for travel to states where abortion is legal, CNBC reported on Friday.

Deutsche Bank, which is headquartered in Germany with operations in the US, is updating its employees’ health benefits to cover travel and lodging costs for medical treatments that are at least 100 miles away from the employee, a person familiar with the matter said.

The responses reflect the way powerful firms in Wall Street’s orbit, from banks and asset managers to influential consulting firms, are under pressure to respond to societal issues, like racial inequity and LGBTQ rights.

And in an era of stakeholder capitalism, these firms walk a fine line, risking alienating shareholders, employees, and clients — and losing their business — if they appear to support one cause over another.

The financial services industry has also played a role in advancing anti-abortion sentiment. Banks such as JPMorgan and Citi have long track records of donating to lawmakers who sponsored so-called trigger laws. These laws automatically criminalize abortion in 13 states, including Texas and Tennessee, now that Roe has been overturned.

Here are how firms on Wall Street have responded.

The New York-based bank said in a memo on Friday that it would reimburse costs for employees to travel out of state to seek an abortion, Insider first reported.

“We have extended our healthcare travel reimbursement policies to include all medical procedures, treatments and evaluations, including abortion services and gender-affirming care where a provider is not available in proximity to where our people live,” Bentley de Beyer, the firm’s global head of human capital management, wrote in the memo sent on Friday afternoon.

Bank of America said in an email to employees on Friday that it would expand coverage for US healthcare-related travel starting on July 1, according to a copy of the memo Insider reviewed.

“For employees and their dependents who are enrolled in our US self-insured health plans, we are expanding the list of medical treatments that are eligible for travel expense reimbursement,” the memo said, expanding this coverage to reproductive healthcare including abortion, cancer treatment, and hospital admissions for mental health conditions.

Sara Wechter, Citi’s head of human resources, sent a memo to employees on Friday afternoon addressing the Supreme Court’s decision, according to a memo Insider viewed.

“While we are still assessing the impact of the Supreme Court decision and are aware that some states may enact new legislation regarding reproductive rights, we will continue to provide benefits that support our colleagues’ family planning choices wherever we are legally permitted to do so,” Wechter said.

Wechter referred to the commitment the bank made in March to cover the costs of staff traveling to receive abortion care. At the time, it was the only such commitment on Wall Street.

The German bank is updating health benefits to cover travel and lodging costs for medical treatments that are 100 miles away or more, a person familiar with the matter told Insider.

This applies to all healthcare treatments, including abortion care. The update is not effective immediately, but it is being rolled out imminently, the person said.

The bank told employees that it would pay for travel to states that allow legal abortions, according to a memo CNBC viewed.