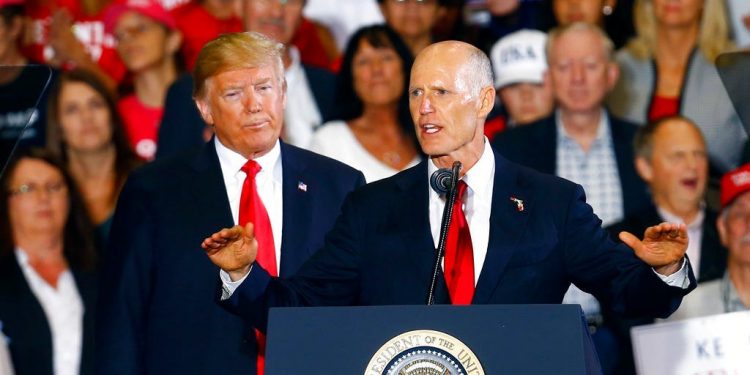 Then-President Donald Trump stands behind then-Gov. Rick Scott as he speaks at an election rally in Pensacola, Florida., on November 3, 2018.

From his Mar-a-Lago resort in Florida, Donald Trump is using his endorsement to seize back control of the GOP and pave the way for another possible presidential bid.

Trump is granting his stamp of approval to candidates across the US ahead of the November elections, in the process sparking furious courtship from hundreds of wannabe future stars of his movement.

GOP sources told Insider how candidates navigate the endorsement process, which is mostly shrouded in secrecy.

They described hopefuls being grilled by Trump’s aides and family members, making public shows of loyalty, being granted a scorecard, and finally impressing Trump one on one.

As with many things in Trumpworld, the sources said, the former president’s whims are paramount, and advice or careful planning can easily be thrown aside in favor of his gut feelings.

“If you’re a Republican running in a primary right now, the single greatest endorsement that you can get is President Trump,” said Sean Spicer, Trump’s first White House press secretary, in an interview with Insider.

“Whether you’re running for president to dog catcher. The base of the party is going to be influenced by his endorsement.”

For candidates without elite connections, such as a Trump aide or a powerful GOP donor, they must undergo a series of challenges to secure a prized audience with the former president, Republican sources told Insider.

Some spoke on condition of anonymity as they were not authorized to share information about the endorsement process.

A spokesperson for Trump did not respond to requests for comment from Insider.

In order to impress Trump, candidates must first get past a panel of close aides to the former president.

The group interviews candidates, and rates them based on their broad loyalty to Trump’s Make America Great Again (MAGA) agenda.

One source said that two issues rank above all others: hardline opposition to immigration, and support for “election integrity,” a euphemism for Trump’s so-called “Big Lie” that the 2020 election was stolen from him by mass fraud.

As the scale of Trump’s endorsement operation has evolved, members of the panel have taken on different roles, another source told Insider.

Some are dispatched to meet candidates in their home states and assess them personally, while others coordinate at a national level, per the source.

Two sources said that some candidates wind up with a physical score card rating their suitability, which is handed to Trump to further whittle down the options.

Donald Trump answers questions from reporters after making a video call to the troops stationed worldwide at the Mar-a-Lago estate in Palm Beach Florida, on December 24, 2019.

The key hurdle is impressing Trump himself, who likes to interview candidates personally, often at the Mar-a-Lago resort he has made his home after leaving the White House.

Jim McLaughlin, a New Jersey based pollster who has worked for Trump since 2015, told Insider that when assessing a candidate, Trump likes to to establish if there is “chemistry” between them.

A key question for the former president, one source said, is not just whether the candidate will win, but whether they would be loyal and support Trump in a possible 2024 campaign.

That quality means Trump is comfortable skipping the vetting process to endorse some candidates who worked with him in the past.

“I know of an instance where he, you know, he had had a conversation with a couple folks and said, if you run, I’ll endorse you. And it was plain and simple,” said Spicer.

For some candidates there is another route. Instead charting the maze through Trump’s aides to reach Trump, a candidate can send out a emphatic public message in support of Trump’s election-fraud conspiracy theories.

One source nicknamed this a “bat signal” for the former president and his advisors.

At least one candidate in Michigan backed by Trump secured his endorsement in this way, without intermediaries. Support for the election-fraud theory is particularly important there, and in other states where Trump narrowly lost in 2020, said a source.

The former president’s raft of endorsements had worried some GOP figures, given the regularity with which Trump endorsees are revealed to have unsavoury, or allegedly criminal, pasts.

It was revealed in February that Trump-endorsed Texas congressional candidate Monica De La Cruz has been accused of abusing her estranged husband’s daughter.

In Missouri Trump is, per a Politico report, warming to Eric Greitens, who resigned as governor in 2018 a,od scandal. Greitens was accused of having an affair with his hairdresser and then threatening to blackmail her with naked pictures.

Sarah Longwell, a Republican strategist who focuses on swing voters, said that some of Trump’s endorsements would taint the Republican Party nationally and turn off independent voters.

“There are lots of candidates that now have a national profile in big races who are crazy, corrupt, terrible.”

Another concern moderate voters were expressing in focus groups, she said, was about Trump’s fixation with election fraud conspiracy theories.

“It will create a national narrative that I think is similar to what happened in 2010,” she told Insider, referring to first mid-term elections under Obama, when the GOP fell short of expectations by failing to win back the Senate.

Rendy Newman, a Georgia-based attorney who served as US ambassador to Luxembourg under Trump, described Trump as a “very good judge of character.”

He said that the background of candidates was being vetted, but stressed that Trump mostly relied on his own judgement.

Ford O’Connell, a Florida-based GOP strategist, dismissed the concerns of critics as those of a Republican elite that has lost contact with the GOP base and has long been hostile to Trump.

The photo op and endorsement

For candidates who make the grade, they are invited to Mar-a-Lago for a photo op, and an official tweet from the former president’s spokesperson announcing they’ve secured his backing.

But for the candidates, there remains the most important hurdle of all: winning over the the voters.

For Spicer, even if some of his candidates fail to win their primaries, Trump will still come out well.

But it’s the broader public in November who will determine whether Trump’s elaborate endorsement strategy pays off.

“Politics, it’s about winning,” said Newman. “In November, we wake up, and Republicans have control of the Senate in the House and most of the caucuses are dominated by Trump-endorsed candidates, that’ll be one story. If not, it’ll be a different story.’