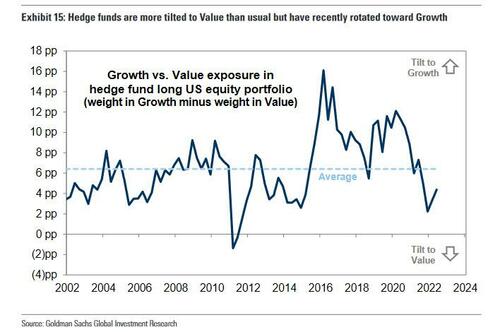 In addition to the previously discussed trends revealed by the latest batch of 13Fs, Goldman’s Ben Snider overnight published his quarterly hedge fund tracker report (available to professional subs in the usual place), summarizing the key trends in hedge fund holdings and ownership, and which confirms what we knew previously: in Q2, just when megacap tech stocks crashed as inflation exploded higher, hedge funds ramped up bets on megacap US tech stocks while trimming overall holdings to concentrate on favored names, with conviction growing to levels last seen before the pandemic.

This Hedge Fund Trend Monitor, which analyzes 795 hedge funds with $2.4 trillion of gross equity positions ($1.7 trillion long and $764 billion short), found that funds boosted tech and consumer discretionary holdings, while cutting energy and materials wagers, a trade which once again backfired spectacularly as tech crashed and energy soared. Since then however, the story has changed as Nasdaq 100 valuations rose well above the average for the past decade as the index soared from its June lows. The gauge remains under pressure, however, as higher rates weigh on the present value of future profits, hurting growth sectors like tech.

The composition of hedge fund portfolios has made funds more sensitive to market beta than current below-average net leverage alone would signal. Tilts toward growth stocks and away from defensive “quality” factors have contributed to an exceptionally high recent correlation between the most popular hedge fund positions and the S&P 500. During the last three months, that correlation has registered 0.6 compared with an average of 0.3 during the past decade and 0.1 during the past 20 years.

Within the broader tech space, hedge funds lifted net exposures in industries where they are overweight, such as Application Software, and in underweight industries, including Tech Hardware and Semiconductors. Within Health Care, funds added to their overweight in Biotech but reduced the Pharma industry from overweight to underweight.

“Big Tech” accounted for much of the increased tilts to the Info Tech and Consumer Discretionary sectors. The increased length in Info Tech was driven in large part by NVDA, AAPL, and TEAM, while TSLA and AMZN helped drive the increase in hedge fund exposure to Consumer Discretionary. However, smaller stocks also contributed; of the 15 Info Tech stocks with the largest increases in popularity during 2Q, only ADBE has a market cap larger than $50 billion

Hammered tech stocks managed to stage a powerful bear market rally in mid-June, when traders reassessed bets on the number of future rate hikes by the Federal Reserve after the US economy showed signs of slowing and started pricing in the coming Fed pivot. A gauge of megacap tech stocks has risen 10% this quarter, compared to a 9% rise in the S&P 500 Index.

But the optimism has petered out heading into this week’s Jackson Hole conference on renewed hawkish concerns, with the market split on whether the Nasdaq 100’s near 13% jump in July was anything more than a bear market rally.

“There will likely be more pain ahead as markets are still under-pricing the Fed rate path,” said Charu Chanana, strategist at Saxo Capital Markets Pte.

With the average US hedge fund returning just -9% YTD amid chaos and confusion in the space, Goldman’s Snider wrote that “stymied by an uncertain market environment and poor recent returns, hedge funds have cut leverage, shifted back towards growth, and increased portfolio concentrations.” And while “performance has recently improved, matching the typical experience during correction rebounds”, Goldman found that “leverage has room to rise if the market remains resilient.”

The report also found that average weightings of top 10 holdings jumped to 70% in the three months ended June, the highest concentration since the first quarter of 2020.

In another sign of “conviction” (or perhaps just fear of over-trading), position turnover for the funds fell to a new record low as the average fund turned over 23% of distinct equity positions during 2Q, and 13% of the largest quartile of positions. Position turnover declined in all 11 sectors.

Indeed, unlike the start of 2022 when gross and net leverage collapsed, Goldman finds that hedge fund leverage no longer appears to be declining but remains low relative to the last few years. Aggregate hedge fund net leverage calculated based on publicly-available single-stock data registered 54% at the start of 3Q 2022, a substantial increase from earlier in the year. Higher-frequency exposures incorporating more assets calculated by Goldman Sachs Prime Services show hedge fund net leverage that has stabilized in recent weeks but still registers well below 1-, 3-, and 5-year averages.

The recent stabilization of hedge fund leverage and outperformance of the most popular hedge fund long positions are consistent with the typical patterns around previous equity market drawdown troughs. In five previous 10%+ S&P 500 corrections since 2011, hedge fund net leverage and the long/short performance of popular hedge fund positions have usually inflected higher around the market trough, just as they did near the recent S&P 500 low in mid-June. In these episodes, leverage continued to rise gradually and Hedge Fund VIPs continued to outperform modestly during the subsequent few months. This pattern would suggest further upside to hedge fund length and the outperformance of popular positions through the remainder of 2022 if the equity market remains stable or continues to climb, although clear downside risks remain especially if Powell decides to unleash the Hawk-ano on Friday.

In terms of absolute holdings, Amazon replaced Microsoft at the top of the Goldman Hedge Fund VIP list – the most popular long position – a timely call given that the former has rallied 26% this quarter versus an 8% climb in the latter. The funds also boosted bets on Nvidia, Apple, Atlassian and Tesla according to the report.

Much more in the full report available to pro subs.