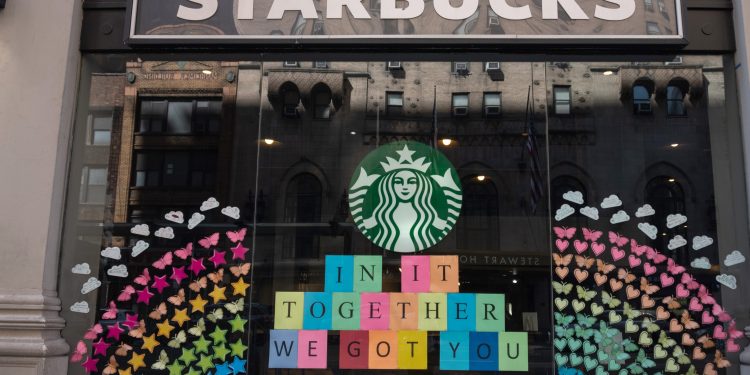 The union alleges that the company was attempting to scare employees out of organizing within Cremin’s store.

This June, Starbucks is reportedly threatening to imperil workers’ access to gender-affirming healthcare if they choose to unionize.

Bloomberg’s Josh Eidelson reports that Workers United, the union representing Starbucks partners, alleged in a filing with the National Labor Relations Board that the company is “threatening employees with loss of benefits” — which includes “loss of gender-affirming healthcare for transgender employees.”

Starbucks is known as an industry leader for its healthcare coverage. In 2018, the coffee chain announced that it would expand its gender-affirming healthcare to procedures like facial feminization and breast augmentation.

“Most of my coworkers are queer, and many of us rely on the transgender healthcare benefits. We are uniquely vulnerable when Starbucks makes veiled threats that gender-affirming healthcare could be taken away,” Neha Cremin, a partner at an Oklahoma City Starbucks, said in a statement to Insider. “Many of us began working at Starbucks because it was the only realistic way we could think to afford transition-related healthcare.”

The union alleges that the company was attempting to scare employees out of organizing within Cremin’s store, after 150 Starbucks branches around the country have voted to unionize since the end of last year. Starbucks employees throughout the US have accused the corporation of attempting to union-bust; Bloomberg also reported this month that the company permanently shut down an Ithaca, New York, branch in response to union activism, according to employees.

The NLRB has already been called upon several times as Starbucks workers across the country attempt to unionize. The labor board previously petitioned to have seven Starbucks workers in Memphis “who were unlawfully fired” reinstated. According to CNBC, the regional NLRB director in Buffalo, New York accused the company of 29 unfair labor practice charges in a complaint.

Starbucks did not immediately respond to Insider’s request for comment, but it denied the workers’ claims in a statement to Bloomberg.

“We are not threatening our partners with the loss of benefits if they join a union,” spokesperson Reggie Borges said on Tuesday. “We take a great deal of pride in offering industry-leading benefits and have done so for more than 50 years.”

Cremin told Bloomberg that, in a one-on-one meeting, her manager said that unionizing would mean negotiating benefits, and potentially losing some of them — and then said that they know Cremin has used trans healthcare benefits. In Kansas, the labor board has accused Starbucks in a complaint of threatening “the loss of health benefits” if workers unionize, according to Bloomberg.

Cremin’s store is located in Oklahoma, which has passed several bills aimed at restricting the trans community. The state has banned trans women from playing in female sports, and some trans residents have said that they intend to flee the state.