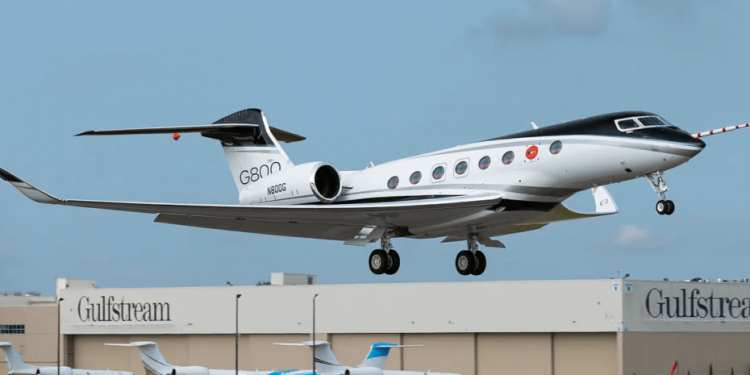 The Gulfstream’s new G800 ultra-long-range aircraft took to the skies this week over Savannah/Hilton Head International Airport in Georgia. The two-hour test flight, using a green jet fuel, was successful.

The mission of the G800 is to meet the growing demand for both private business jets and long-haul aircraft. Gulfstream officials say it is the aircraft with the longest range in the industry. The G800 can fly up to 14,800 kilometers at a cruising speed of Mach 0.85 (1,041 kilometers per hour) and an altitude of 15,500 meters.

The new Gulfstream boasts a customized 31-meter sweep advanced high-speed wing and a pair of Rolls-Royce Pearl 700 engines with 8,278 kilograms of thrust each, allowing it to fly from runways as short as 1,800 meters.

The G800 seats up to 19 passengers. The cabins have ergonomic seats, a high-definition circadian lighting system to reduce the impact of changing time zones, and an air system that constantly replaces the cabin air rather than recirculating it. The aircraft has 16 windows, which Gulfstream says are the largest in the industry.

A look at the nuclear-powered Titanic of the sky

NASA has figured out how to look for life on Mars: experiment shows where it could be

Astronomers have found planets that are different from Earth, but suitable for life