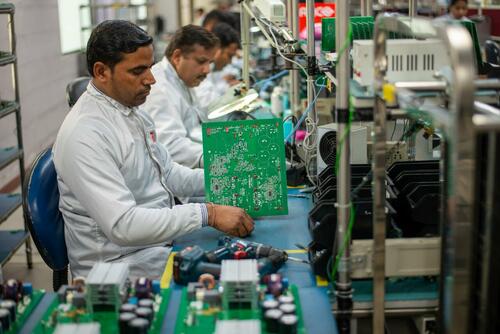 DC-based and international consulting firms are seeing a sharp increase in clients seeking briefings on war risks between China and Taiwan, following US defense and intelligence leaders spotlighting the potential for conflict amid the backdrop of the Ukraine war.

A fresh report in Financial Times describes that these firms and think tanks have observed a huge uptick in company executives seeking information that would help them gauge risk and exposure in the scenario of a Chinese invasion of the democratic-run island. The general atmosphere of unpreparedness during the late February Russian invasion of Ukraine is fueling this in large part.

The report follows on the heels of FBI director Christopher Wray last week recounting to corporate leaders that many Western companies were caught flat-footed upon the assault on Ukraine.

“There were a lot of western companies that had their fingers still in that door when it slammed shut,” Wray said of the Feb.24 massive military offensive. “If China does invade Taiwan, we could see the same thing again, at a much larger scale. Just as in Russia, western investments built over years could become hostages, capital stranded, supply chains and relationships disrupted.”

One prominent D.C. consulting firm which has ties to former officials in the Bush administration, as well as close connections to former Secretary of State Hillary Clinton, had this to say as cited in the FT report:

Eric Sayers, head of the Indo-Pacific practice at Beacon Global Strategies, said China’s crackdown on democracy in Hong Kong coupled with the Ukraine invasion had “rapidly accelerated” the fears.

“A year ago Beacon would occasionally be asked a question or two about Taiwan from our clients,” said Sayers.

“We are now being asked to brief CEOs directly on Taiwan politics and the military situation [and to] organise meetings with senior US officials or retired military leaders to understand how they view the situation.”

The sources cited in the report additionally explain that company leaders’ anxiety has risen given that Chinese PLA warplanes have been flying more frequently and in larger numbers near Taiwan. Also naval war drills have occurred with greater regularity, as Beijing has lately sought to assert in the face of US naval sail-throughs that the Taiwan Strait is not legally defined as “international waters”.

Kurt Tong, managing partner at The Asia Group, said he had seen a “sharp uptick” in interest about Taiwan since Russia invaded Ukraine.

“Firms want to know how to perceive situational risks and they want to know what key elements they should be tracking on an ongoing basis,” said Tong, a former veteran Asia diplomat. Tong added that the clients requesting briefings ranged from technology and financial groups to pharmaceutical makers and consumer goods manufacturers.

The “shock” and scale of Putin’s Ukraine invasion is without doubt the key factor behind the desire of companies to be prepared, as one US intelligence veteran is cited as saying:

Chris Johnson, a former top CIA China analyst who heads China Strategies Group, said companies were concerned about risks that ranged from the impact on Taiwan as the most important semiconductor manufacturer in the world to concerns about their ability to continue manufacturing operations in China if war erupted over Taiwan. He said the rising concern was being driven by “Ukraine and the never-ending 2027 forecast”, referring to the warning from Davidson.

“It’s so saturated in the CEOs’ news flow that they cannot help but feel concerned. The Ukraine invasion puts it very much on the front burner, when in the past it was standard question Number 6 about what is the latest on Taiwan.”

Other consulting firms have said regional and international companies have even sought to create ‘contingency plans’ – while they also game out various emergency scenarios – covering everything from having temporary supply chain alternatives in place to ways that their personnel and staff could be rapidly evacuated if hostilities break out.