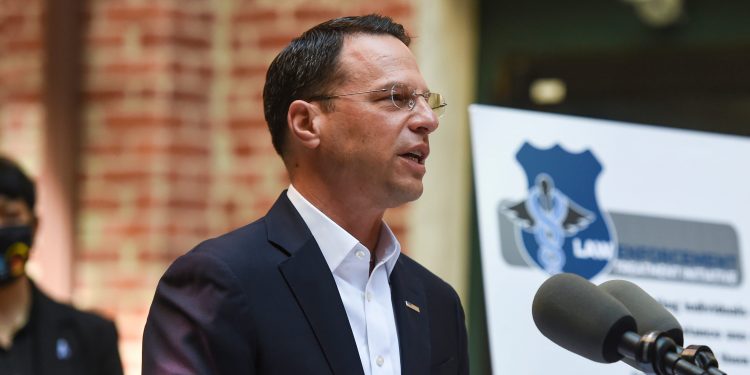 Pennsylvania Attorney General Josh Shapiro, a Democrat running for governor, has sought to portray his opponent Doug Mastriano as out of step with the mainstream.

A group of nine Pennsylvania Republicans has broken with the state GOP and announced support for the Democratic candidate for governor Josh Shapiro, calling his GOP opponent — state Sen. Doug Mastriano — an “extremist” who threatens American democracy.

In a statement released by the Shapiro campaign, nine current and former elected Republicans said they would be voting for the Democrat this November in large part due to his support for the rule of law. In 2020, Shapiro, currently serving as Pennsylvania’s attorney general, fought lawsuits filed by former President Donald Trump that sought to overturn the election.

Mastriano, at the same time, held briefings with Rudy Giuliani that pushed false claims of mass voter fraud; he later used campaign funds to bus supporters to Washington, DC, for the January 6, 2021, rally.

Former Rep. James Greenwood, a moderate Republican from southeast Pennsylvania who left Congress in 2005, told The Philadelphia Inquirer he feared that Mastriano, as governor, would undermine the integrity of the 2024 election. The state senator continues to push conspiracy theories about the 2020 presidential election and has promised to appoint a top election official who shares his views.

“I think he’s an extreme, dangerous guy who is out of touch with the majority of the people in Pennsylvania,” Greenwood told the paper.

Mastriano’s campaign did not immediately respond to a request for comment.

‘A threat to the rule of law’

Former Rep. Charlie Dent, a Republican from Allentown who retired from Congress in 2018, likewise cited fears of how Mastriano could impact the next presidential election in a statement backing Shapiro. The attorney general, Dent said, would unite the state.

“Doug Mastriano, on the other hand, is an extremist who is a threat to the rule of law and the constitutional order,” Dent said, per the Pennsylvania Capital-Star.

First elected in 2018, Mastriano, a veteran of the US Army, established a name for himself among right-wing activists by challenging mask mandates and opposing COVID-19 vaccines, which he has falsely claimed are not true vaccines. In addition to busing supporters to Washington, DC, on January 6, 2021, a matter being investigated by the congressional committee examining the insurrection, video shows Mastriano was at the US Capitol when rioters breached police lines.

After receiving a late endorsement from Trump, Mastriano beat out a crowded field to become the Republican nominee for governor with a plurality of the ballots cast. Neither he nor other Republicans have challenged the legitimacy of that vote.

Since winning the nomination, Mastriano has sought to allay some Republicans’ concerns about his statewide electability by focusing more on economic issues.

In an interview last week with the right-wing media outlet Newsmax, Mastriano conceded that the decision to overturn Roe v. Wade would provide a boost to his opponent’s campaign given surveys that show a majority of Pennsylvanians believe it should be legal to terminate a pregnancy. The state senator, who opposes abortion in all instances, with no exception for the life of the parent, went on to call the question of reproductive rights a “distraction” from gas prices and inflation.