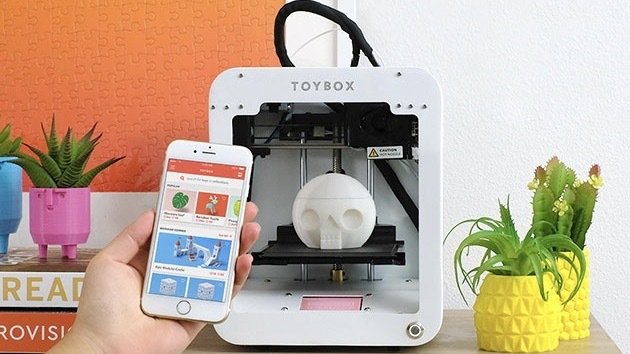 How often does a trip to the store end in tears when your child doesn’t get to go home with a new find from the toy aisle? Sure, they have toys at home, but they don’t have that toy.

The Toybox 3D Printer is a kid-friendly 3D printer that has its own massive catalog of toys that your child can print directly from their own digital toy store. Easy to use and equipped with tons of options, the Toybox 3D Printer Deluxe Bundle is on sale for only $349.99 (Reg. $469).

Kids can spark creativity by making their own toys

This intuitive 3D printer lets your child print their own toys, and it doesn’t require a knife to remove prints. Just pull up the companion app and start looking through a growing library of toys that can be printed with the touch of a button. You can also create and upload your own toy designs. If your child wants a specific toy that isn’t in the catalog, open up your favorite CAD program and start building it for them. If they’re old enough, that could even be an opportunity to teach your child how to make 3D designs on the computer.

As seen on Shark Tank (where it won a $150,000 investment), this 3D printer comes with biodegradable printer food in eight colors with enough material for 100-300 toys. ToyBox also recently partnered with many recognizable properties like Hanna-Barbera, Cartoon Network, and Looney Tunes, so you could print some well-known faces.

A 3D printer for kids, and it’s on sale

How many toys does it take before your child decides they have enough? You may never find out, but just the starter kit with the Toybox 3D Printer gives them at least 100 new things to play with and the opportunity to learn while they do. For a limited time, get the Toybox 3D Printer Deluxe Bundle on sale for $349.99 (Reg. $469).