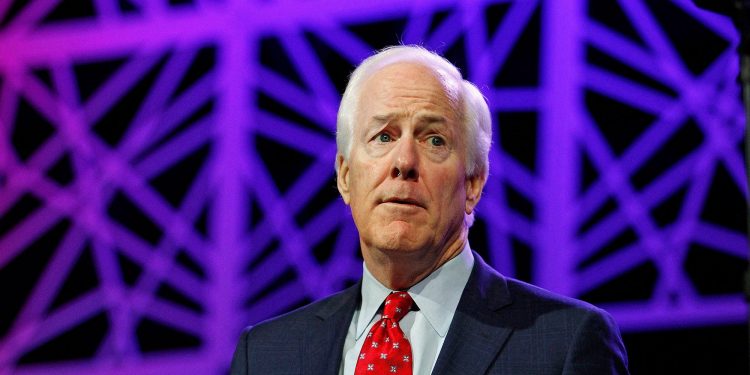 Sen. John Cornyn of Texas speaks at the Republican Party of Texas state convention in Dallas on May 13, 2016.

Republican Sen. John Cornyn of Texas was met with loud booing and jeering as he spoke at the Republican Party of Texas’s state convention on Friday.

“Go back home!” attendees could be heard chanting on one video shared by Houston Chronicle reporter Jeremy Wallace as Cornyn concluded his speech.

Christopher Hooks, a senior editor for Texas Monthly, noted that Cornyn has been booed in past years by convention attendees.

Cornyn’s appearance came just hours after the state party approved a resolution condemning the senator for his work on a bipartisan deal on new gun restrictions in the wake of the Uvalde, Texas school shooting on May 24 that left 19 elementary students and two teachers dead at the hands of an 18-year-old gunman.

“We reject the so called ‘bipartisan gun agreement,” read the resolution, which also said that red-flag laws “violate one’s right to due process” and said “those under 21 are most likely to be victims of violent crime.”

The agreement currently being hashed out by Cornyn and other senators — including Democratic Sen. Chris Murphy of Connecticut, a prominent advocate for gun safety legislation — includes providing resources to state and tribes to allow them to enact so-called “red flag” laws, expanding support for community behavioral health centers, closing the “boyfriend loophole” by keeping guns from unmarried people found guilty of violence against a partner, and funding for school security.

Ten Republican senators announced their support for the initial framework, and even Senate Minority Leader Mitch McConnell said on Tuesday that he was supportive.

“For myself, I’m comfortable with the framework, and if the legislation ends up reflecting what the framework indicates, I’ll be supportive,” McConnell said at his weekly press conference.

Lawmakers had hoped to turn the agreed-upon framework into legislative text this week, but left town without doing so. They hope to put the bill up for a vote next week ahead of the July 4 recess.

Axios reported on Thursday that several of Cornyn’s Republican colleagues are uneasy with the new agreement.

“I understand the framework is shifting. But you know, I’m not a huge fan of it,” Republican Sen. Josh Hawley of Missouri told the outlet.

“There’s considerable unhappiness in the conference that we seem to be approaching a bill that will unite all the Democrats and divide the Republicans,” another Republican senator anonymously told Axios.