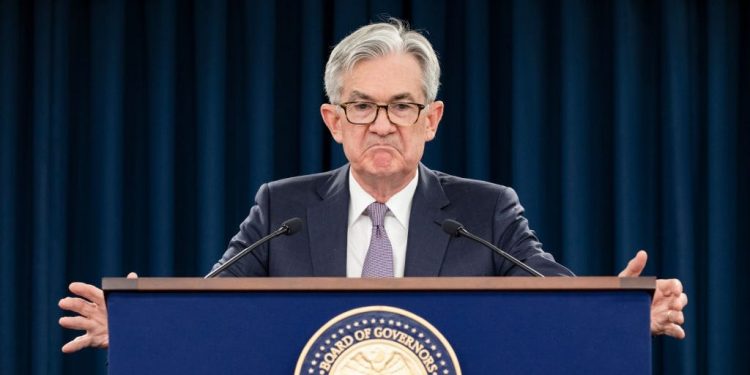 The Fed, under Chair Jerome Powell, is set to hike rates in 2022.

Goldman Sachs now thinks the Federal Reserve will hike interest rates four times in 2022 as it grapples with red-hot inflation, having previously penciled in only three rate rises.

The Wall Street giant said in a Monday note it believes the Fed will start selling some of its assets as early as July. The central bank currently holds almost $9 trillion worth of bonds, mainly government ones.

The rate hikes and balance-sheet reductions could prompt further volatility in stocks, by pulling down bond prices. That in turn would push up yields, making the securities look more attractive to investors.

Stocks — particularly in speculative technology companies — have tumbled this year as investors prepare for the US central bank to dial back its support for the economy and financial markets.

Goldman said that recent positive economic data was likely to intensify Fed officials’ concerns about inflation, which is running at a 39-year high.

The bank noted that unemployment dropped to 3.9% in December from 4.2%, even though the jobs-added figure came in lower than expected.

“The US labor market continues to make rapid progress,” Jan Hatzius, the bank’s chief economist, wrote in the note. “The strength of wage inflation also points to growing labor scarcity.”

Goldman thinks the Fed will hike interest rates in March, June and September, and it has now added in December this year, as policymakers try to stamp down on price rises.

The bank believes the Fed will keep hiking in 2023 and 2024 until the federal funds rate reaches between 2.5% and 2.75% — a much more aggressive set of increases than most investors expect.

Read more: 2022 stock market outlook: Here’s what major Wall Street firms are forecasting about the timing and direction of the Fed’s first rate hike since the pandemic began, and what it means for your investing

Its analysts also updated Goldmans view on when the Fed is likely to start trimming its balance sheet. Previously, it pegged this for December, but now expects the process to start in July, or even earlier.

The Fed owns $8.8 trillion of assets, and currently reinvests the money from maturing securities. It snapped up more than $100 billion of bonds and other securities per month during the coronavirus crisis, in an effort to stabilize markets and encourage borrowing by reducing yields.

Hatzius pointed to the recently released minutes from the Fed’s December meeting, where some officials noted it could be appropriate to begin to reduce the balance sheet relatively soon after the first rate hike.

Expectations that the Fed could soon start selling assets has been a key driver pushing up bond yields — which move inversely to prices — in recent days.

The yield on the key 10-year US Treasury note has risen from around 1.49% at the start of the year to above 1.77% as of Monday, taking it close to its highest level since early 2020.