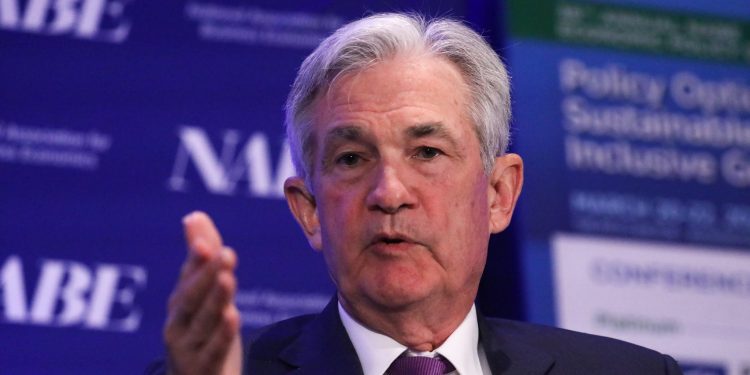 Goldman Sachs has said it now expects the Federal Reserve to hike interest rates by 50 basis points at both the May and June meetings, after Chair Jerome Powell said he was open to moving faster in the fight against inflation.

“The labor market is very strong, and inflation is much too high,” Powell said Monday at the National Association for Business Economics.

The Fed chief stressed the need to move quickly, saying: “If we conclude that it is appropriate to move more aggressively by raising the federal funds rate by more than 25 basis points at a meeting or meetings, we will do so.”

Goldman Sachs analysts, including chief economist Jan Hatzius, said in a note Monday that Powell’s comments were a sign that a 50 basis point hike is coming in both May and June. The bank previously forecasted two increases of 25 basis points at those meetings.

Central banks like the Fed play a key role in managing the economy, and they are charged with making sure inflation stays under control.

A basis point is equal to 0.01 percentage points. The Fed has traditionally raised interest rates in 25 basis point increments, but it is weighing up bigger increases as it tries to get a grip on the strongest inflation in 40 years.

Two increases of 50 basis points would take the federal funds target rate to between 1.25% and 1.5% in June.

That’s higher than Fed officials signaled they were willing to go earlier this month, when they raised interest rates for the first time since 2018, by 25 basis points.

The Wall Street bank also said it expects the Fed to start reducing the size of its balance sheet in May. The Fed bought up trillions of dollars of bonds during the coronavirus crisis to try to ease the pressure on the financial system, but is now planning to let those securities mature, reducing its support for the market.

Some investors are worried that the Fed will trigger a recession by hiking interest rates too aggressively.

Pimco co-founder Bill Gross told the Financial Times at the weekend that the central bank won’t be able to hike interest rates to much above 2.5%, or it will “crack the economy.”

Read more: An investing expert explains how to add crypto exposure to your stocks portfolio through ETFs – and names 3 top ones to own