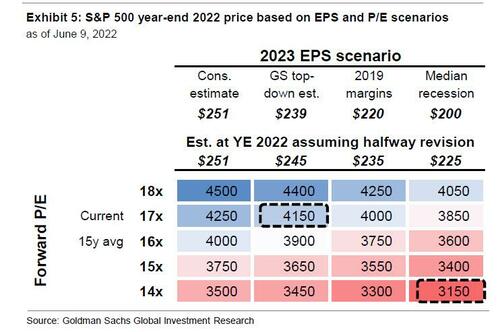 After months of pretending that it was not wrong all along in the past year with its overly optimistic economic forecasts (based on catastrophically wrong “transitory inflation” models) and its ridiculous S&P price target distributed by the bank’s head of US equity research coverage David Kostin (work product not to be confused with Goldman’s far more credible and accurate flow desk research which is only available to ZH professional subs), Goldman finally threw in the towel and after tongue-in-cheek “suggesting” that the S&P would drop to 3,150 in case of a recession as a result of collapsing forward multiples – which of course, will never happen, you see, it’s just a hypothetical because Goldman’s entire ultra-bullish narrative would come crashing down and make a mockery of all Goldman forecasts, including this one…

… Overnight Goldman also folded on forward earnings, echoing what Morgan Stanley’s Michael Wilson has been saying for months, with Goldman strategist Ben Snider writing that consensus forecasts for S&P 500 earnings and margins for 2023 “seem too optimistic and could further pressure equity prices as the ‘E’ falls, suggesting current P/E multiples are actually higher than they appear.”

In “Consensus profit margin forecasts have further to fall” Snider reveals that finally, Goldman’s model points to a 70bps EBIT margin decline next year for the typical S&P 500 company in the bank’s non-recessionary base case…

… and a 130 bps compression in a recession scenario…

… even as all other analyst estimates show the median stock’s EBIT margin expanding by 60 bps to a new record high next year.

What does this mean? While the answer is pretty clear, Goldman’s Chris Hussey narrates as follows, “If our model proves to be correct, we may see large cuts to earnings ahead. Assuming no change in expected revenues, margin compression alone could reduce the median stock’s expected 2023 EPS growth from +10% to 0%.“

Finally, here is how Goldman suggests you position for the coming earnings crash: ” We continue to recommend investors focus on stocks where they can be relatively confident in the forward trajectory of earnings, including firms with stable growth and the Health Care sector, which has grown earnings in each of the last several recessions.” Translation: buy energy until such time as the Biden admin sends the US into the 2nd great depression with oil rising above $200, at which point all bets are off.

While there is more in the full Goldman note, we won’t bore readers with it – it should be pretty obvious for those who have been reading this website…

… but those hell bent on reading it can find it in the usual place (for professional subscribers).