Global stocks rise, but US futures ease ahead of Biden talks in Europe as UK inflation hits a 30-year high 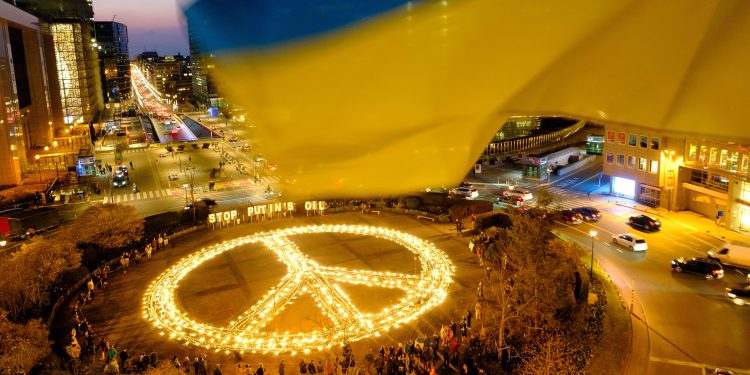 Avaaz activists and young Ukrainians demonstrate with a giant peace sign in Brussels on March 22.

The MSCI All-World index was up 0.16%, while in Europe, the Stoxx 600 fell 0.2%, paring early gains due to pressure from losses in banks and financial stocks. The two indices have risen by 1% and 2%, respectively over the last week.

Biden will meet key allies in Brussels and Warsaw Thursday to discuss further sanctions on Russia and preventing an escalation of the war in Ukraine.

“Equity markets have risen, with sentiment largely sanguine in the midst of the geopolitical turmoil,” Susannah Streeter, a strategist at stockbroker Hargreaves Landsdown, said.

“All eyes will be on tomorrow’s meeting between President Biden and European leaders, where agreements to tighten the sanctions screw are expected to try and increase the pressure on Moscow to end the fighting,” she said.

The US and its allies will impose more sanctions on Russia and introduce measures to tighten existing sanctions, national security adviser Jake Sullivan said Tuesday, according to a Reuters report.

US stock futures on the S&P 500, the Dow Jones and the Nasdaq 100 were modestly in negative territory, down between 0.2 and 0.3% on the day. In the premarket, GameStop leapt 12%, after logging a 30.7% gain Tuesday, as Chewy founder Ryan Cohen scooped up more stock in the video game retailer.

The pound eased by around 0.1% against the dollar after data showed UK consumer inflation hit a 30-year high of 6.2% year-on-year in February. It adds to a cost-of-living crisis in Britain, where energy bills, gas prices, and taxes are all rising. It also adds to the chances that the Bank of England will raise interest rates again in May.

More worryingly, the more forward-looking wholesale inflation figures suggest the pressure on consumers will only get worse, analysts said.

“This is likely to be more of a concern for the Bank of England, who while offering a dovish narrative last week, may well have to tighten a lot more, if the Federal Reserve starts to tighten aggressively, in order to keep a floor under the pound,” CMC Markets strategist Michael Hewson said.

Bond yields eased, having surged this week following surprisingly hawkish rhetoric from Federal Reserve Chair Jerome Powell. Yields on the 10-year German Bund fell 4 basis points to 0.467%, and 10-year UK gilt yields dropped to 1.67%, reflecting unease over the outlook for the UK economy. Ten-year US Treasurys were broadly steady around 2.37%.

Brent crude headed back towards $120 a barrel Wednesday, rising 1.6% to $117.33 a barrel. Data on Tuesday showed a large drop in already tight US crude inventories, while bad weather cut output from a key pipeline that runs from Turkey to the Russian Black Sea port of Novorossiysk.

EU leaders are considering following the Biden administration’s lead by with a ban on Russian oil exports, and any news on this is likely to inject volatility into the market.

“Russian crude and products are still flowing to the market to varying degree, but our understanding is that this is mostly crude and products which were contracted already before the invasion,” SEB strategist Bjarne Schieldrop said in a note.

“Next up are Russian exports in April, and there we see canceled cargoes and problems for Russia to find buyers,” he said.