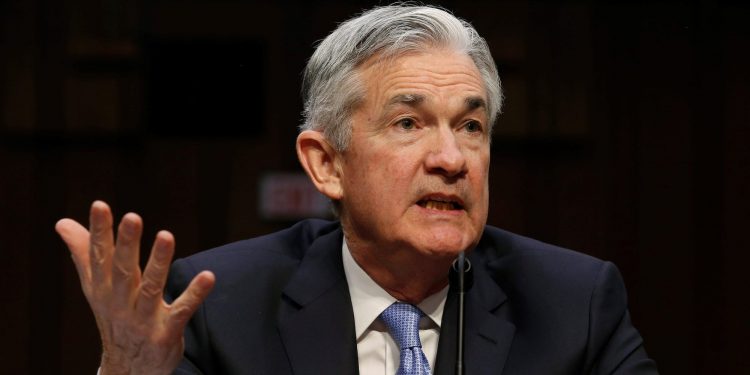 US stock futures signaled a relief rally for Wall Street from losses in the previous session, as the market reset for a higher chance of a half percentage point rate increase at the Fed meeting in May.

“There is an obvious need to move expeditiously to return the stance of monetary policy to a more neutral level, and then to move to more restrictive levels if that is what is required to restore price stability,” Fed Chair Powell said Monday, noting inflation is “much too high”.

If required, the Fed would move more aggressively to raise the benchmark interest rate by 50 basis points, he added.

”Caught between a rock and a hard place, the Fed sees little option but to try and chip away inflation with even bigger interest rate hikes this year, if price pressures keep mounting,” Susannah Streeter, markets analyst at Hargreaves Lansdown, said.

Goldman Sachs now forecasts a 50 basis point hike at both the May and June meetings of Fed policymakers.

“Our best guess is that the shift in wording from ‘steadily’ in January to ‘expeditiously’ today is a signal that a 50bp rate hike is coming,” its analysts said.

Powell’s comments helped lift US bond yields to multiyear highs, with the 10-year Treasury note last up 2 basis points at 2.34% — its highest since May 2019.

Powell is due to speak Wednesday at a panel hosted by the Bank for International Settlements.

Meanwhile, investors continue to monitor developments in the Russia-Ukraine conflict. Russia has escalated its bombing of cities in Ukraine,

Russia has continued to bombard several cities in Ukraine, and said it hit a Kyiv shopping center because it was used to store rockets. Late Monday, Ukraine President Volodymyr Zelenskyy offered to end Ukraine’s NATO membership ambitions in exchange for a withdrawal of Russian troops.

On Monday, ECB President Christine Lagarde said central banks in the US and Europe will fall out of sync on policy as the war in Ukraine will have a bigger impact on its neighbors in the region.

Oil prices rose towards $118 a barrel Tuesday, before turning lower, as European leaders debated a Russian crude embargo, with Germany and the Netherlands are resisting a ban. EU leaders will meet Thursday, and the decision to ban would need to be made by all 27 states.

The Japanese yen fell 0.8% to a six-year low of 120.50 against the dollar after Powell’s remarks. Asian stocks were driven higher partly by a climb in export-dependent Japan, as a weaker yen could boost trade outlooks.

Read More: Bank of America: Buy these 15 ‘beaten down’ tech stocks with strong cash flow ahead of their eventual rebound