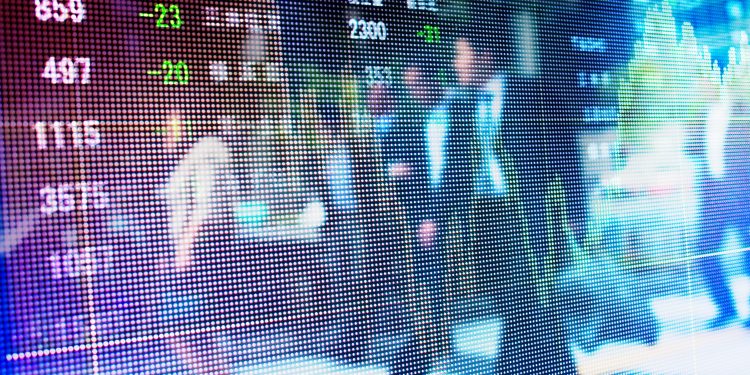 Traders are reflected in a screen at the Tokyo Stock Exchange.

Global shares rose Monday, shaking off some concern around the potential for a damaging spike in inflation prompted by Friday’s US jobs report, which showed wage pressures are building while cases of the Omicron variant are surging.

Last week, equity markets were shaken by rising bond yields and a far more hawkish tone from the Federal Reserve, which looks set to tighten monetary policy faster than expected. Technology stocks, bonds and cryptocurrencies were all hammered as a result.

By Monday, some stability had returned. US stock futures rose, indicating a stronger start on Wall Street later. S&P 500 futures were up 0.2% in early European trading, while Dow Jones futures gained 0.1%, and futures on the Nasdaq 100 rose 0.5%.

Coming up Wednesday is a key read on US consumer inflation. The risk is for another punishingly high number, following November’s 30-year high of 6.8%. The consensus forecast according to TradingEconomics is for a reading of 7%, which, if met, would be the highest since June 1982.

This would likely turn the heat up on the Fed to act fast to stave off any damaging price rises, particularly in light of Friday’s jobs numbers, even as the Omicron coronavirus variant causes cases of COVID-19 to surge.

“For the second month in a row, the headline number fell well short of expectations. However on all other levels the jobs report was much more positive,” CMC Markets chief strategist Michael Hewson said.

Nonfarm-payrolls data showed the economy added 199,000 jobs in December, well below the expected 450,000, but the unemployment rate fell to a pre-pandemic level of 3.9%. More to the point for the Fed, wages rose 4.7%, compared with expectations for a 4.2% gain.

“These wages numbers appear to be what has put upward pressure on yields, as it becomes more apparent that the Fed is running out of excuses not to raise rates in the coming months,” Hewson said.

Investment bank Goldman Sachs says it now expects the Fed to raise rates four times this year, instead of three.

Investors will tune into a Senate hearing with Jerome Powell on Tuesday, part of his confirmation as chairman of the Fed for a second term, for more indications of the central bank’s thinking.

Against this backdrop, the bond market suffered more losses Monday. The yield on the 5-year Treasury note gained almost a full quarter of a percentage point last week, its biggest weekly rise since September 2019. It was last around 1.55%, its highest level since January 2020, up 5 basis points on the day.

“Despite a headline miss in Friday’s jobs report, the rise in wages and the drop in unemployment has fuelled fears of an overheating economy,” analysts at broker IG said in a note.

In Europe, the Stoxx 600 eased 0.08% in early trade, weighed down by a 17% loss in Atos stock after the French consulting company issued a profit warning.

In Asia overnight, shares traded broadly higher as investors took heart from a rebound in Hong Kong techs, and on the back of expectations for reform from the Chinese markets regulator. The MSCI Asia ex-Japan index rose 0.9%.

After a blistering week of losses, the cryptocurrency complex found some stability Monday. Bitcoin gained 0.8% to trade around $42,095 — still around its lowest since late September — while ether rose 1.2% to $3,167. Altcoins solana and polkadot gained 2% and 3%, respectively.