Germany is on the brink of recession due to energy security, and other parts of Europe could be close behind 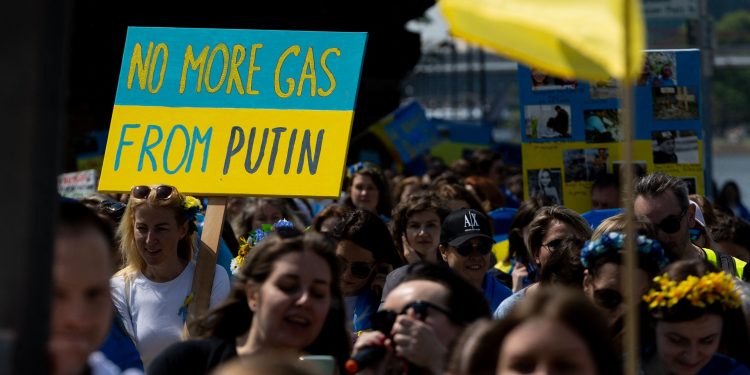 The European Union is under pressure to cut Russian gas over the war in Ukraine.

The European Union is racing against time to stem its addiction to Russian natural gas as the bloc’s massive fuel purchases are drawing accusations that it’s funding the war in Ukraine.

That’s on top of Russian President Vladimir Putin’s weaponization of the country’s energy, which is putting the EU in a position of weakness as it demands that Moscow end the war.

But it won’t be easy for the EU to wean off Russian gas.

The EU’s GDP could be slashed by 2.5 to 4.2 percentage points if energy imports from Russia were to be halted, according to an analysis by Spain’s central bank released on May 31. Although the dependence on Russian natural gas is not evenly spread across EU countries, some major economies like Germany and Italy are reliant on the fuel — so any fallout from an immediate cut could have a knock-on impact in the region and beyond.

European countries are now scrambling to find replacements for Russian energy, but it could take years. Of all the fossil fuels Russia ships to Europe, natural gas is the most difficult to replace, as it’s harder and more expensive to ship than oil or coal.

Germany — Europe’s largest economy — is feeling the pressure acutely. On March 30, it triggered a plan that could see the country rationing gas if Russian gas were to be cut off.

In April, Deutsche Bank CEO Christian Sewing, who was speaking in his role as the president of Germany’s BDB bank lobby, said “a significant recession” would be “virtually unavoidable” if Russian oil and natural gas were to be halted.

But it’s hard for Germany to break the habit. Russia has been Germany’s natural-gas supplier for about 50 years — and it has always been reliable, even during the Cold War and throughout the collapse of the Soviet Union, Davide Oneglia, a senior economist at London-based consultancy TS Lombard, told Insider in April. Russia accounts for about 35% of Germany’s natural-gas supplies.

Germany has said it’s aiming to wean itself off from Russian natural gas by 2025, but in the meantime, it has to cave to Russian demands to pay for the fuel in rubles using a special payment plan or risk getting its gas cut.

Another big customer of Russian natural gas is Austria, which buys about four-fifths of its natural gas from the Eastern European country, according to the government. Like Germany, Austria has also triggered an energy contingency plan that will lead to gas rationing as the last stage.

Austrian energy minister Leonore Gewessler said on May 6 the country is confronting “uncomfortable truths” about its energy security and that it’s working to eliminate Russian gas from the country’s energy mix, per Bloomberg.

Franz Angerer, the managing director of the Austrian Energy Agency, said in an April 26 statement the country is working toward weaning itself off Russian gas by importing from other European countries and using biogas and green hydrogen, but that it can only do so by 2027.

“While we condemn the actions of Russia, on the other side we have no immediate alternative to keep our companies and households supplied with energy,” said Stern, according to the news outlet.

Italy — the EU’s third-largest economy — also has a large exposure to Russian gas. The country generates 40% of its electricity from natural gas and gets about half of its fuel from Russia, according to Reuters and data service Statista.

Rome is rushing to find alternatives to Russian gas and has recently signed deals with several African countries, including Egypt and Algeria, for supplies. Until Russian gas can be completely replaced, Italy is not in a favorable position to deal with Russia.

Italian Prime Minister Mario Draghi held a phone call with Putin on May 26 “to find a shared solution to both the ongoing food crisis,” Rome said.

Putin told Draghi he’ll open up grain and fertilizer exports if sanctions against Russia are lifted, according to an official statement from the Kremlin.

The country’s GDP could drop by as much as two percentage points if Italy halts Russian natural-gas imports in June, industry association Confindustria wrote in a report on May 28.

But not all European countries are panicking over potential cuts to Russian energy.

France — the EU’s second-largest economy — was the third-largest importer of Russian gas in 2020, accounting for about 8% of the country’s exports, according to the US Energy Information Administration. Even so, France doesn’t appear all that troubled by the prospect of a Russian supply cut.

“If you look at France, they’re very well shielded in among the best places in Europe to deal with this,” Oneglia told Insider.

The EU looks to renewables and alternative energy sources

Like the rest of Europe, France is also moving toward renewables, although the country has announced six new nuclear reactors in the next few decades for its energy needs.

Russia has already cut  gas supply to Poland, Bulgaria, and the Netherlands due to their refusal to pay for natural-gas imports in rubles. But these countries don’t appear to be panicking.

In Bulgaria, two nuclear reactors generate one-third of the country’s capacity, according to the World Nuclear Association. Sofia has also been working at diversifying its energy sources, including building a gas pipeline with Greece that is expected to start commercial operations in September, Reuters reported, citing Bulgarian Prime Minister Kiril Petkov.

The Gas Interconnector Greece-Bulgaria will be connected to an existing pipeline in Europe, allowing gas to be transported from Azerbaijan via Greece to Italy and beyond. It’s expected to start operations on July 1, according to Euractiv.

Poland also started preparing for a Russian natural-gas cut “many years ago,” Polish Deputy Foreign Minister Marcin Przydacz told the BBC after the Kremlin cut its supply on April 26. Przydacz added to BBC that there are “options to get the gas from other partners,” including the US and the Middle East.

In the Netherlands, the government plans to import more liquefied natural gas from countries other than Russia, the Dutch government wrote on its website. It has been diversifying into renewable energy as it’s shutting down its largest gas field due to concerns about earthquakes.

In 2020, renewable energy accounted for 11% of total energy consumption in the Netherlands — up from 8.8% in 2019, according to the country’s statistics department. The increase was largely due to increasing solar and wind power capacity, as well as biomass.