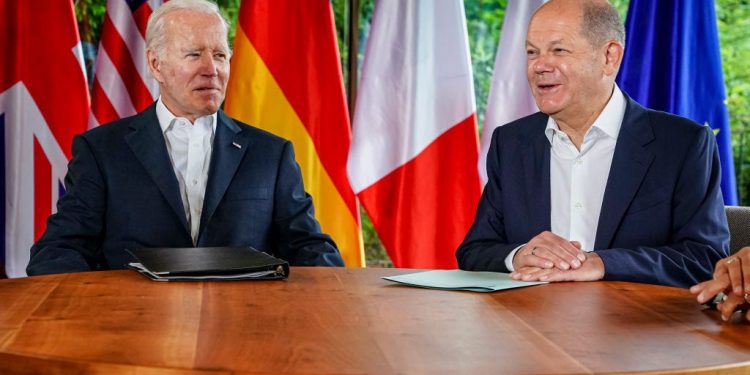 President Joe Biden and German Chancellor Olaf Scholz before a meeting with other G7 leaders in Germany this week. The group sent mixed signals on climate action.

Leaders of the seven richest large democracies on Tuesday sent mixed messages on climate action at the close of a summit in Germany, promising to both shore up natural-gas supplies and slash planet-warming pollution.

The G7 said it could phase out a dependency on Russian energy without compromising its climate goals, but advocacy groups are skeptical after world leaders endorsed investments in natural gas as a temporary solution.

Countries also agreed to pursue a cap on the price of Russian oil imports, which they hope will slow global inflation and undercut the energy revenue helping fund President Vladimir Putin’s war in Ukraine.

Here are the major takeaways.

The European Union and US Treasury Secretary Janet Yellen pushed for setting an artificially low price on Russian oil. The details haven’t been worked out, but G7 leaders said in a final communique that it might involve prohibiting the shipment of Russian crude oil and petroleum unless it’s “purchased at or below a price to be agreed in consultation with international partners.” They instructed finance ministers to hash out how to implement and enforce a cap.

“By working together to limit the price of Russian oil, we will further strengthen the existing sanctions imposed by the G7 and our partners to make sure that Putin will not be able to profit from the higher global energy costs that have resulted from his invasion,” Yellen said in a statement Tuesday.

An opening for new natural-gas investments

G7 leaders said that investing in liquefied natural gas, or LNG, was “appropriate as a temporary response” to the energy crisis but warned against locking in fossil-fuel use because that would make global climate goals unachievable. The group encouraged making gas infrastructure ready for low-carbon and renewable hydrogen.

The statement raised alarm among climate advocates, who criticized the G7 as watering down promises to accelerate the clean-energy transition and sending conflicting messages. New fossil-fuel development isn’t compatible with keeping global temperatures from rising by more than 1.5 degrees Celsius above preindustrial levels — the goal of the Paris climate accord — and hydrogen technology is still nascent.

“Hydrogen — if it is to be useful for climate goals — will be produced from renewables in a variety of places and not necessarily in the same place as current gas production,” Luca Bergamaschi, a cofounder and executive director of ECCO, an Italian climate-change think tank, tweeted on Sunday.

Critics also said the G7 statement backslid on a commitment in May by the group’s energy and climate ministers to halt financing by year’s end for fossil-fuel projects that are not paired with carbon-capture technology. That pledge around so-called unabated fossil-fuel projects for the first time included Japan, a top financier of foreign fossil fuels.

Oil Change International and a coalition of civil-society groups said the communique on Tuesday risked jeopardizing the opportunity to shift at least $33 billion a year in fossil-fuel funding from the G7 governments to clean energy.

Gillian Nelson, a deputy director of policy at the We Mean Business Coalition, said that while the G7 did promise to “fully or partially” decarbonize its power sectors by 2035, it fell short of discussing how that could be achieved.

German Chancellor Olaf Scholz said during a press conference that he wanted climate protection to be an advantage in international trade. He got the G7 to support setting up so-called climate clubs by the end of the year that major polluters and emerging economies could join. The goal is to create global markets for green industrial products, such as through carbon pricing or other climate-mitigation strategies, as well as to help finance poorer countries’ energy transitions.

John Kirton, the director of the G7 and G20 Research Group managed by the University of Toronto, said there would likely be a focus on carbon border adjustments that slap tariffs or impose quotas on imports from countries without a price on emissions or aggressive climate action.

Carbon border tariffs are taking shape in Europe, but the US and Japan, which don’t have a price on carbon, have been resistant to such a policy.