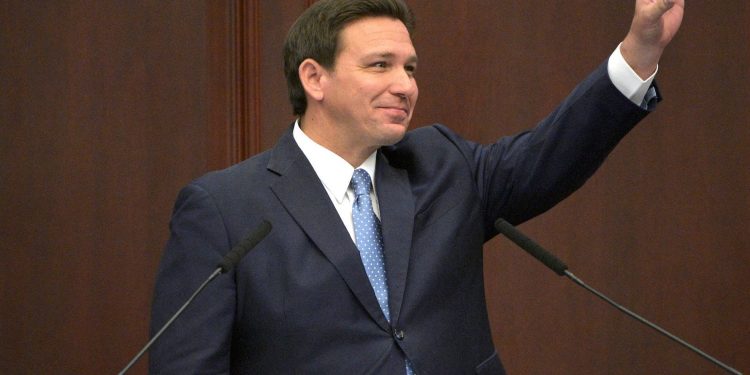 Florida Gov. Ron DeSantis on Tuesday addressed a joint session of the Florida legislature in Tallahassee.

Republican Gov. Ron DeSantis on Tuesday took a victory lap over his handling of the coronavirus pandemic, declaring Florida the “freest state” and bashing restrictions elsewhere in the US.

“Together we have made Florida the freest state in these United States,” DeSantis said during his State of the State Address, which kicks off the 2022 legislative session in Tallahassee. “While so many around the country have consigned the people’s rights to the graveyard, Florida has stood as freedom’s vanguard.”

His speech took aim at top issues that Republicans plan to attack Democrats over during the 2022 elections, from inflation to school teachings on racism, as well as immigration, voting, and coronavirus restrictions — particularly school closures.

But his main message was that he believed he’d been right all along when it came to his approach to the coronavirus pandemic.

DeSantis is up for re-election in Florida this year, and his policies on the coronavirus pandemic have been controversial among Democrats but embraced by many Republicans. He’s also seen by political observers as a top tier 2024 Republican presidential candidate should former President Donald Trump take a pass on attempting his own political comeback.

In contrast to federal guidance pushed by the Biden administration, DeSantis has resisted business and school lockdowns. He’s also opposed vaccine and mask mandates for Florida at a time when people across the US moved to the Sunshine State in droves during the pandemic.

It’s an exodus that DeSantis was quick to call attention to in his speech.

“Florida has become the escape hatch for those chafing under authoritarian, arbitrary and seemingly never-ending mandates and restrictions,” he said.

“These unprecedented policies have been as ineffective as they have been destructive,” DeSantis said of COVID-19 restrictions imposed by other states and encouraged by the federal government. “They are grounded more in blind adherence to Faucian declarations than they are in the constitutional traditions that are the foundation of free nations.”

DeSantis also declared federal mandates “unconstitutional” and said he wanted the legislature to fight back on Washington, DC, inaction on inflation by passing a gas tax holiday. The inflation problem the US is facing is partly tied to the coronavirus relief bill Biden signed into law in 2021, which poured billions of dollars into the economy.

The GOP-led Florida legislature in the audience on Tuesday was almost entirely maskless at a time when cases of the omicron coronavirus are spiking across the US. Florida cases are rising, and while death rates are lower than many other large states, more than 62,810 Floridians have died from the virus.

Still, in a recent shift, some Democratic governors and the White House have backed off many of the lockdowns they advocated for during previous coronavirus surges and in particular are urging schools to stay open. DeSantis called school closures elsewhere “reckless and politically motivated,” declaring that “we were right and they were wrong.”

“We faced opposition — from hysterical media, from unions and the politicians they control,” DeSantis said. “We even faced lawsuits aiming to close the schools, but we wouldn’t allow fear or politics to harm our kids.”