Former President Bill Clinton encouraged Andrew Cuomo to appeal to New York voters and tell them his ‘fate was in their hands, not the politicians’ instead of resigning amid sexual harassment scandal 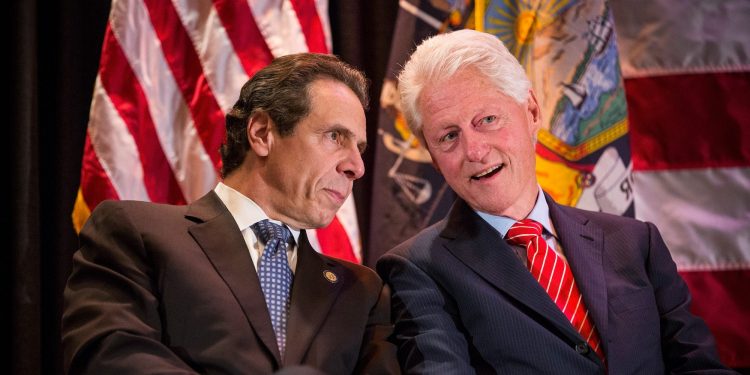 As former New York Gov. Andrew Cuomo faced down a political firestorm stemming from a sexual harassment scandal, he sought advice from his cabinet of advisers, including one of his former bosses: former President Bill Clinton.

In a Politico excerpt from her forthcoming book, “Any Given Tuesday,” Lis Smith — a prominent Democratic political communications specialist who also worked on Transportation Secretary Pete Buttigieg’s 2020 presidential campaign — details the final days of Cuomo’s tenure as governor.

Hours after the release of Attorney General Tish James’s bombshell August 2021 report on sexual misconduct allegations against the governor from 11 women — all of which the report found to be credible — Cuomo huddled with his closest political advisers. They seemed to conclude that his career was over, per Smith, who was among the people advising Cuomo.

“Governor. Stop. It’s over,” an unnamed adviser told Cuomo on a conference call, according to the excerpt. “There is no path forward for you.”

But even after that conference call, and several individual calls to those same advisers, Cuomo was looking for a sympathetic figure. According to Smith, he found one in Clinton, whom Cuomo had served under in the late 1990s as Secretary of Housing and Urban Development.

“The sole exception was former President Bill Clinton, who told him that he needed to go out and address the people of New York directly: to state that his fate was in their hands, not the politicians,'” Smith wrote. “The consensus — among advisers, at least — was that unless Clinton, with his legendary political skills, was willing to do the mea culpa himself, it would do more harm than good.”

Cuomo had been able to weather multiple ongoing scandals up to that point, including allegations of sexual harassment from two former staffers in the weeks leading up to James’ report. The turning point for Cuomo was when New York’s Democratic-majority legislature turned on him, the result of both the scandal and an accumulation of enemies made by his hard-charging administration. Impeachment went from a remote possibility to a likely outcome, but the Assembly decided to stop pursuing it once he left office.

Within a week, Cuomo ended up announcing his resignation with two weeks’ notice, and despite some public appearances since then and a nearly $20 million campaign war chest, he has yet to run for office again.

The disgraced former governor later blamed cancel culture for his resignation, telling a congregation in New York that “Twitter and newspaper headlines have replaced judge and jury.”

Clinton, of course, has faced down his own political firestorm over sexual misconduct.

After being impeached by the House of Representatives in 1998 in connection with his a sexual harassment lawsuit filed by Paula Jones and lying under oath about a sexual relationship with White House intern Monica Lewinsky, Clinton was acquitted by the Senate, and continued to serve out the remainder of his second term.

A spokesperson for Clinton did respond to Insider’s request for comment.