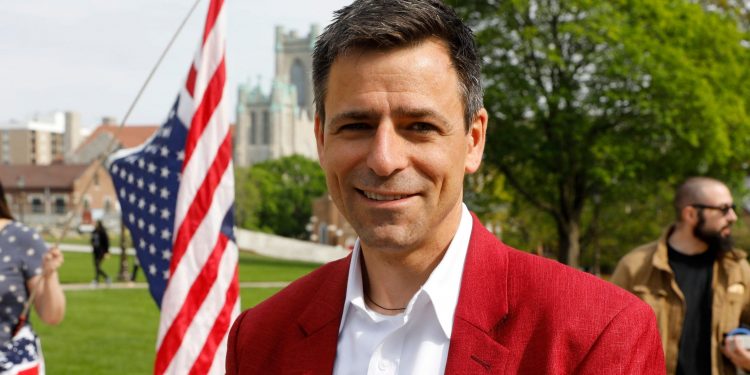 Ryan Kelly, Republication candidate for Governor, attends a Freedom Rally in support of First Amendment rights and to protest against Governor Gretchen Whitmer, outside the Michigan State Capitol in Lansing, Michigan on May 15, 2021.

A former Michigan GOP leader and advisor to the Lincoln Project said Republican voters have “lost their goddamn minds” after a recent poll showed a Michigan gubernatorial candidate’s arrest over the Capitol riot hasn’t dampened his popularity among voters.

Ryan Kelley was arrested by the FBI on June 9, had his home searched, and was accused of participating in the insurrection on January 6, 2021, according to filings from the Department of Justice.

Prosecutors allege Kelley — a real estate broker — encouraged the mob at the Capitol to advance toward stairs leading to the entrance of the building.

But a poll taken by the Detroit Free Press in the days after his arrest showed Kelley as the leading GOP gubernatorial candidate in this year’s race by 4 percentage points.

Kelley has the highest name recognition and favorability compared to the other candidates, according to the poll.

The Michigan GOP gubernatorial primary has been shaken up this year after half of the 10 candidates  — including the polling leaders — were removed from the ballot over accusations of forged signatures.

But Jeff Timmer, the former executive director of the Michigan GOP, said Kelley’s polling lead after his arrest shows how “far from normalcy the Republican mainstream has become.”

“In the last election cycle for governor, had a candidate been arrested by the FBI it would have been the end of their campaign, not the beginning,” said Timmer, a senior advisor with the anti-Trump Republican group the Lincoln Project.

He added that far-right voters “are so far down the rabbit hole of delusional propaganda and living in an alternative reality fueled by their own echo chamber of fiction.”

“Republican voters have lost their goddamn minds,” he said.

A call to his campaign manager, Karla Wagner, was not immediately answered.

In an interview with News 8, Wagner said the charges were “all about the election that’s coming up” and called Kelley’s arrest an “intimidation tactic.”

Since his arrest, Kelley has been prohibited from leaving the state and from possessing firearms. A donation drive on a Christian fundraising site linked from Kelley’s campaign has raised over $12,500 as of June 17 for his legal defense.

In an interview with Insider, the treasurer of Kelley’s political action committee said the funds would be used “strictly for legal defense.”

Chris Kelley — who said he was “related” to Ryan but would not say how — declined to comment on Timmer’s statements. But he echoed Wagner’s remarks about Ryan Kelley’s arrest.

“A lot of this seems suspicious to us,” Chris said. “I will guarantee you that whatever they’re saying he’s being accused of it did not happen and it was not him that was doing this. I know that for absolute fact.”

In April 2020, Kelley led a protest at Michigan’s capitol building in Lansing, where a raucous crowd compared Whitmer to Adolf Hitler for issuing a stay-at-home order during the COVID-19 pandemic.

Members of the armed protest ultimately stormed the building during a legislative session.

Timmer said it can be easy to rule out radical candidates like Kelley, but it would “be dangerous” to assume he doesn’t actually have a shot at being governor.

If he is able to snag Trump’s endorsement, Kelley will be “without question” the Republican candidate facing current Michigan Gov. Gretchen Whitmer in the general election, Timmer said.

“I hope that the Democrats become better in their unified message from the White House down about the danger of these Republicans,” Timmer said.