Forget About A Soft Landing, What’s The Shape Of The Hard Landing? 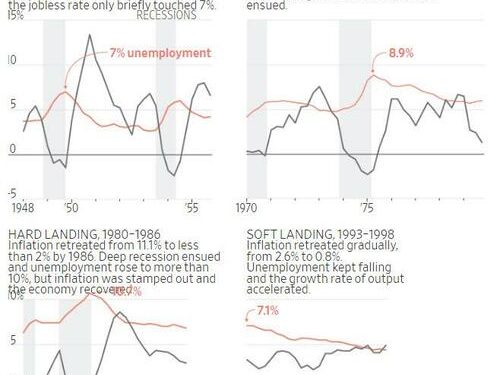 Forget About A Soft Landing, What’s The Shape Of The Hard Landing?

Authored by Mike Shedlock via MishTalk.com,

A recession and hard landing is on the way. What will it look like?

In Hot Economy, Rising Inflation the WSJ notes The Fed Has Never Successfully Fixed a Problem Like This. That link is not paywalled for those who wish to read.

Forget About A Soft Landing

I believe the soft landing proponents at the Fed and Goldman Sachs are in Fantasyland.

So does Danielle DiMartino Booth, founder of Quill Intelligence.

“I think that is why you are seeing such erratic behavior in the bond market and in the stock market. I think it is because there is so much uncertainty. The idea that any central bank can orchestrate a soft landing is disingenuine… “#Cavutohttps://t.co/DfVoV0HDpC

Regarding stock and bond market action:

“You cannot even call it volatile anymore. You should call it violent. the types of swings we are seeing day to day. That’s because there is so much uncertainty about what the outcome of this is going to be. But I think that anybody who suggests the Fed can engineer a soft landing at this point, that any central bank right now can engineer a soft landing, Europe is going into recession quicker than the United states is. I think it’s just specious, just disingenuous.”

Shape of Things to Come

If we can rule out a soft landing, what will a hard landing look like? The WSJ models are so out of date.

First I have a note about amazing success.

Did the Fed ever take a bow? Win awards? Declare success?

What a travesty of justice to not even stop to take a bow!

The Fed had such amazing success in bring about inflation. Did it ever stop to take a bow?

I think not, and what a travesty to have such unglorified success. But what’s next?

Spiral Out of Control Theory

And now, an econ PhD backs up their car. pic.twitter.com/h97GwhtUuA

You guys heard about the Fed’s “soft landing”? pic.twitter.com/yu08oDT8ie

What Will It Be?

Nonfarm Payrolls and Employment data from BLS, chart by Mish

There is one aspect of the Goldman Sachs thesis that may be correct.

Before people start getting fired or laid off, hiring will slow. Then employers will cut hours. I do not expect to see the sustained mass firings and layoffs that we saw in 2008-2009.

I discussed that idea in Might We See a Minimal Job Loss Recession? Why Not?

Those looking for outright delusion can find it in multiple places. For example, on April, James Bullard, St. Louis Fed President, won my Hoot of the Day award.

St. Louis Fed President Says “Fed is Not Far Behind the Curve”

Also in the delusional category, Chicago Fed President Charles Evans Resorts to Hope, Does Not Foresee a Recession

De-Globalization: New Supply Chains Are Inefficient and Will Drive Up Inflation

One of the many problems the Fed faces is de-globalization. The New Supply Chains Are Inefficient and Will Drive Up Inflation

Interest rate hikes are a very blunt instrument and the Fed is in a bad setup largely of its own making.

Bear Market Is Over Says Cramer

Meanwhile, please note Cramer’s Call Bear Market is Over: “You Have Been Warned”

On March 25, Cramer touted the end of the bear market. Let’s see how well that one ages.

I strongly disagree with Cramer: Most People Have No Idea How Much Stocks are Likely to Crash