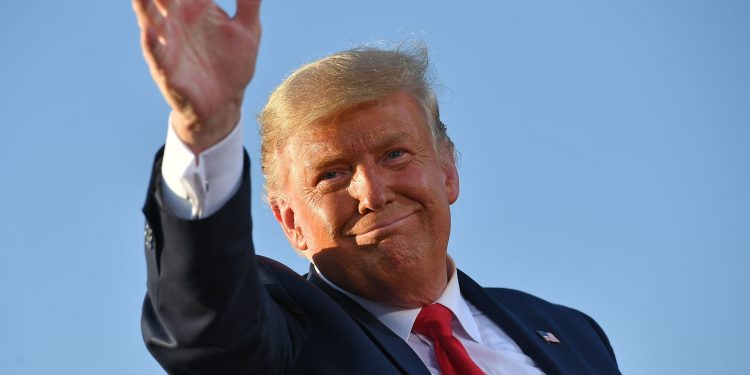 In a 26-page lawsuit filed in US District Court for the District of Columbia, the nonprofit, nonpartisan Campaign Legal Center said the Federal Election Commission failed to enforce campaign finance disclosure requirements by declining to investigate the Trump campaign’s use of two firms — American Made Media Consultants and Parscale Strategy — to hide the details of its spending.

The lawsuit followed a separate case, filed in March, in which the Campaign Legal Center accused the FEC of failing to respond to the group’s July 2020 complaint and a January 2021 supplement laying out allegations against the Trump campaign.

An FEC spokesperson declined to comment on the lawsuit.

The original complaint and supplement alleged that the Trump campaign “laundered upwards of three quarters of a billion dollars in 2020 campaign spending” through American Made Media Consultants and Parscale Strategy, a firm run by former Trump campaign manager Brad Parscale.

The Campaign Legal Center drew in part from news investigations, including Insider’s reporting that American Made Media Consultants’ board included family members of Trump and former Vice President Mike Pence.

In its lawsuit Friday, the Campaign Legal Center added that the FEC’s failure to proceed with an investigation into the Trump campaign could embolden the former president and other candidates to repeat the same conduct and deprive voters of details about political spending.

In dismissing the group’s complaint, the FEC went against the advice of the regulatory agency’s own chief lawyer.

The agency’s general counsel recommended in April that the FEC find reason to believe that the Trump campaign violated federal election laws by using American Made Media Consultants and Parscale Strategy as pass-throughs to disguise the ultimate recipients of spending.

Despite that recommendation, the bipartisan commission deadlocked 3-3, falling short of the four votes needed to proceed with an investigation into the alleged violations.

Two of the three commissioners who voted to approve the general counsel’s recommendation issued a statement at the time describing the complaint as “meticulously documented” and the Trump campaign’s conduct as concealing “exactly the type of information” that federal election law is intended to “expose to the sunlight of disclosure.”

Democratic commissioners Shana Broussard and Ellen Weintraub also noted that the dismissal extended Trump’s “remarkable win streak” before the FEC, in which the commission received more than 40 complaints against the former president or his campaign.

Broussard and Weintraub went on to tally the number of investigations the FEC had undertaken into Trump: “a grand total of zero.”