FBI warns crypto fraud on LinkedIn is a ‘significant threat’ 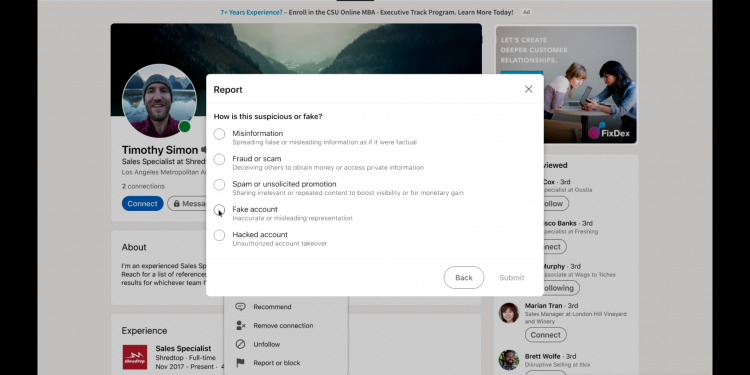 If you have a tendency to talk to people you don’t know on LinkedIn, you may want to take extra care. According to a CNBC report, the company has acknowledged a “recent uptick of fraud on its platform,” and this time the scams involve persuading users to make investments in cryptocurrency. It’s been deemed as a “significant threat” by Sean Ragan, the FBI’s special agent in charge of the San Francisco and Sacramento field offices in California, who spoke to the outlet.

CNBC said the schemes typically began with someone pretending to be a professional and reaching out to LinkedIn users. They would engage in small talk, offering to help users make money through crypto investments. First, they would tell their targets to go to an actual crypto investment platform, but “after gaining their trust over several months, tells them to move the investment to a site controlled by the fraudster.” Thereafter, the money is “drained from the account.”

According to victims interviewed by CNBC, the fact that they trusted LinkedIn as a platform for networking lent credibility to the investment offers.

Ragan told CNBC that “the FBI has seen an increase in this particular investment fraud,” which the outlet said “is different from a long-running scam in which the criminal pretends to show a romantic interest in the subject to persuade them to part with their money.”

In a statement published yesterday, LinkedIn encouraged users to report suspicious profiles. The company’s director of trust, privacy and equity Oscar Rodriguez told CNBC that “trying to identify what is fake and what is not fake is incredibly difficult.”

LinkedIn’s article urges users to “only connect with people you know and trust” and to “be wary of… people asking you for money who you don’t know in person.” The company added “This can include people asking you to send them money, cryptocurrency, or gift cards to receive a loan, prize, or other winnings.”

It also lists “job postings that sound too good to be true or that ask you to pay anything upfront” and “romantic messages or gestures, which are not appropriate on our platform” as signs of potential fraud attempts.

The company isn’t fully relying on its users reporting suspicious accounts as its only defense against scammers on its platform. “While our defenses catch the vast majority of abusive activity, our members can also help keep LinkedIn safe, trusted, and professional,” Rodriguez wrote in the statement. LinkedIn also reported that “96% of detected fake accounts and 99.1% of spam and scams are caught and removed by our automated defenses.”