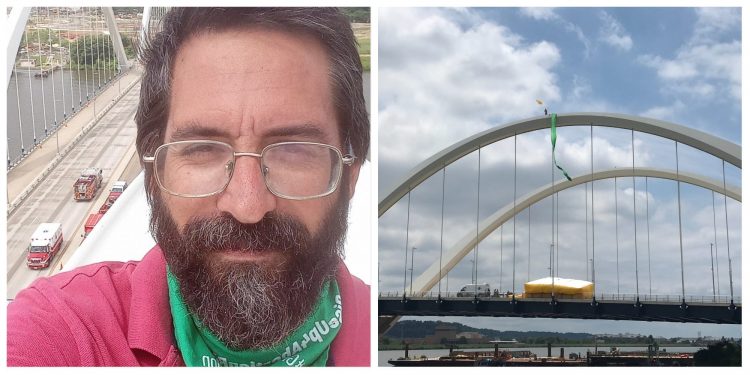 A close up Guido Reichstadter (L) as he sits on the Douglass Frederick Memorial Bridge. He can be seen waving a flag on the right-hand picture.

A man has slept overnight on top of the Frederick Douglass Memorial Bridge in DC to protest the Supreme Court overturning Roe v. Wade.

Guido Reichstadter, 42, told Insider that he had climbed the bridge after having “a very, very, very strong emotional reaction” to the ruling, saying, “I couldn’t not do anything.”

He said that, after the draft legislation had been leaked in May, he’d wake up “gasping for air” thinking about the future and the rights of his 12-year-old daughter.

“There’s never been a point in US history where the rights of the population have been so egregiously attacked and rolled back,” he told Insider.

“The arches were designed in such a way that any reasonably fit person could climb them,” he told Insider. “It seems the designers just took it for granted that people would have the good sense not to climb up them. Of course, the moment I saw them, I knew they had to be climbed.”

“Tens of millions of women are waking up without the right to control their bodies and that’s why I’m on top of this bridge. I can’t understand why the streets aren’t already full of fathers standing up for their children’s lives.”

“I’ve got to do what I have to do to call the population into action.”

The long-time activist who has worked with Rise Up 4 Abortion Rights told Insider that he had has previously been arrested for attaching himself to the barricades surrounding the Supreme Court, which had been erected to protect the building from protesters.

“It’s time to stop the machine. And I’m sitting up here looking down at the interstates, and I’ve been doing so for the last 24 hours. And I’ll be here as long as I can.”

It’s not been an easy 24 hours. Reichstader’s water bottle had rolled off the bridge as soon as he got up there, and the police refused to return it to him.

When asked if he is safe, Reichstader responded, “I’m physically fairly safe. It’s flat up here. But in a larger sense, you know, I wasn’t safe before I climbed up to the bridge. None of us are as long as the Supreme Court is in power.

“The only way we’re going to get to the point of safety is to move through this and stand up for ourselves in harm’s way to fight back non-violently.”

Abortion rights activists participate in a Bans Off Our Bodies rally at the U.S. Supreme Court on May 14, 2022.

The father of two from Miami told Insider that it’s his daughter who had largely inspired his protest against the repeal.

With Reichstadter’s voice breaking with the emotion of his protest, he said that the right — or lack thereof —  to choose to have an abortion is something that “I can only begin to imagine what it’s like.”

Officials have closed the bridge due to the protest, the District Department of Transportation has announced.