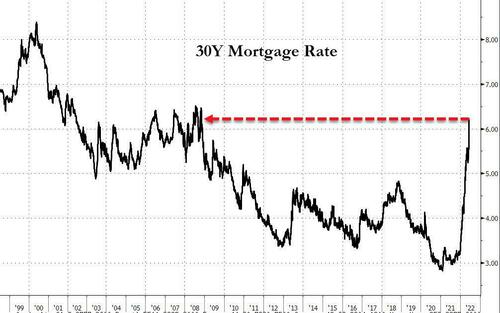 Just hours apart, on Tuesday morning, real estate brokerage firms Compass Inc. and Redfin announced plans to reduce their workforces amid a housing affordability crisis that priced millions of new homebuyers out of the market.

First on the butcher’s block was Compass which announced a plan to slash 10% of its workforce, or about 450 employees, according to Bloomberg, citing a person familiar with the matter who asked not to be named.

COMPASS TO CUT ABOUT 10% OF WORKFORCE AMID US HOUSING SLOWDOWN

Even odds of first negative payrolls print between July and August

Responding to the announcement, Mike DelPrete, a scholar-in-residence at the University of Colorado Boulder told Bloomberg, “I think Compass laying off 10% of the staff is the minimum reaction to market conditions … It’s doing the least possible to treat current symptoms but not addressing underlying challenges with the business model and incredibly high cash burn.”

Then Redfin followed the beat by announcing to cut 8% of workers or about 470 employees. The brokerage said workforce reductions would be made by the end of June.

“To all the departing people who put your faith in Redfin, I’m sorry we can’t keep our commitment to you. With May demand 17% below expectations, we don’t have enough work for our agents and support staff, and fewer sales leaves us with less money for headquarters projects,” Kelman wrote.

He blamed soaring mortgage rates on faltering demand and warned: “We could be facing years, not months, of fewer home sales, and Redfin still plans to thrive.”

Kelman noted in a housing downturn, the company would “grow more slowly … but we’ll still grow, and our share gains will accelerate.”

“We raised hundreds of millions of dollars so we wouldn’t have to shed people after just a few months of uncertainty,” Kelman wrote in the blog post.

“But mortgage rates increased faster than at any point in history. We could be facing years, not months, of fewer home sales, and Redfin still plans to thrive. If falling from $97 per share to $8 doesn’t put a company through heck, I don’t know what does.”

Cooling demand for housing is directly responding to an affordability crisis, pricing millions of homebuyers out of the market as interest rates soar and housing prices are at record highs. The 30Y average mortgage has soared from 3.25% to 6.13% since the start of the year, a stunning move and what is considered a “rate shock.”

The average mortgage rate is the highest since right before the great crash of 2007/08, pushing housing affordability to a new low.

It makes sense why Compass and Redfin are cutting their workforces because of the lack of homebuyers due to an affordability crisis.

The souring macroeconomic backdrop with threats of stagflation as the Federal Reserve will be forced to frontload interest rate hikes this summer and comes as the labor market is on the verge of cracking.

3 mass layoff announcements in the past 3 hours, meanwhile 12 hikes priced in through February. pic.twitter.com/7Q4wfP9J79