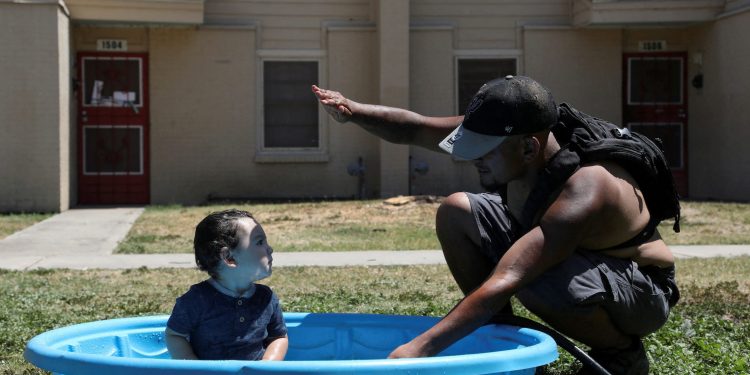 Daniel Bosquez shades the face of Timothy Jalomo, 10 months, from the afternoon sun as he fills a plastic pool with water, as San Antonio, Texas is placed under an excessive heat warning, on July 11, 2022.

The US is suffering through another multi-week heat wave, which is forecast to last nearly the entire month of July.

The Grizzly Giant, a giant sequoia in Yosemite National Park’s Mariposa Grove, is enshrouded in Washburn Fire smoke near Wawona, California, on July 11, 2022.

About 50 million people were under a heat alert in the US last weekend, USA Today reported. Though that number had dropped to 24 million as of Friday, the extreme temperatures are not over yet.

The heat will likely continue across the US for the rest of July, and expand again to the West Coast, according to forecasts from the Climate Prediction Center, which is operated by the National Weather Service (NWS) and the National Oceanic and Atmospheric Administration. The below map shows the center’s projections.

Over the next two weeks, the high-pressure system that’s currently trapping heat over Texas will move west toward California, according to climate scientist Daniel Swain.

“This will bring an extremely broad region of hotter than usual temperatures to the entire western 2/3 of the country,” Swain said in a Twitter thread with forecast imagery from the European Centre for Medium-Range Weather Forecasts.

He added that the coming heat wave will be “remarkable,” both due to the vast land area it covers and its duration. Because it coincides with a pessimistic rain forecast, Swain said that the next two weeks of heat are likely to accelerate fire season.

Amid excessive heat warning, Isaac Mahoney pulls a soft drink out of a cooler in his tent where he lives under the I-37 overpass in San Antonio, Texas, on July 11, 2022.

Extreme heat kills hundreds of people across the US every year. Heat waves are growing more common, severe, and lengthy as global temperatures rise. The 2018 National Climate Assessment found that the frequency of heat waves has tripled since the 1960s, and that the average heat-wave season has increased by 45 days.

So far, this summer is doing its best to demonstrate that trend. The Climate Prediction Center also produces a three-month outlook for temperatures nationwide. That forecast projects a summer of above-average heat across the entire US, with the exception of two small pockets in the north.

“I don’t think we’re going to have record temperatures continue every day or every week through the summer. But I think what this suggests is that the conditions will be favorable to see at least rounds of well-above-normal temperatures at times through the summer,” Marc Chenard, a meteorologist with the NWS, previously told Insider.

The sun sets behind power transmission lines in Texas, on July 11, 2022.

Indeed, this week’s temperatures come on the heels of an exceptionally hot June. Before summer even began, heat had shattered daily temperature records across the country, forced school closures, cost at least three human lives, and killed more than 2,000 cattle. The June heat wave, too, was remarkable for how long it lasted and how far it spread.

The US isn’t alone in its heat-wave plague.

Extreme heat has battered the planet all summer

Europe and China are also experiencing their own record-breaking heat waves — again. Just like North America, those regions suffered through a sweltering June of record-high temperatures. North Africa, the Middle East, and other parts of Asia are facing record heat, too.

“This large area of extreme (and record breaking) heat is another clear indicator that emissions of greenhouse gases by human activity are causing weather extremes that impact our living conditions,” Steven Pawson, chief of NASA’s Global Modeling and Assimilation Office, said in a statement.

As the high-pressure systems that trap heat rolled in and baked the land, fires also broke out in Spain, Portugal, Morocco, and Tunisia.

A firefighter attempts to put out a wildfire caused by extreme temperatures in Larache, northern Morocco, on July 15, 2022.

In Italy, the heat helped trigger the collapse of a portion of a glacier in the Dolomite mountains, leading to a glacier avalanche that killed 11 hikers. Spain’s Health Ministry said the heat there has killed 84 people already in July, following a staggering 700 heat-related deaths in June.

The site of a glacier collapse, photographed from a rescue helicopter in the Alps in northern Italy, on July 5, 2022

On Friday, the UK declared a national extreme-heat warning for the first time ever, in anticipation of temperatures exceeding 104 degrees Fahrenheit next week.

AccuWeather meteorologists warned on Wednesday that this could become Europe’s worst heat wave in 200 years. It could last through the end of the month.

Residents cover up from the sun with umbrellas as they wait for a bus in Beijing, on July 15, 2022.

In China, the heat accompanied deadly floods, another extreme weather event that is becoming more common and more severe in many parts of the world as the climate changes.

In the Northern Hemisphere, there are still two months left of summer.