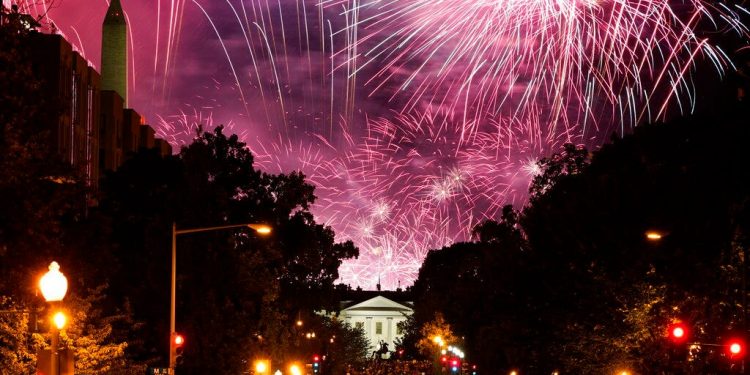 Fireworks light up the sky over Washington after then-President Donald Trump delivered his acceptance speech at the White House for the 2020 Republican National Convention on August 27, 2020.

The former Fox News political editor Chris Stirewalt in his newly-released book criticized the use of the White House grounds as the main stage for the 2020 Republican National Convention — deriding much of the pomp displayed for former President Donald Trump’s official renomination as a “spectacle.”

In the book, “Broken News: Why the Media Rage Machine Divides America and How to Fight Back,” Stirewalt — who says he was fired from Fox in January 2021 — writes that Republican National Committee officials were aware of the poor optics of using the White House for campaign purposes, but did so anyway.

“[S]ome of those officials who attended Trump’s nomination speech delivered from the White House knew that it was not just unwholesome but un-American to use the people’s house that way. I know that, because some of them told me so,” he wrote.

He continued: “The spectacle of Trump using the presidential mansion for a campaign event was bad enough, but he was introduced by his own daughter, whom he had given a high government post. Yuck. As the president was serenaded with an aria from Turandot, sung from the Truman Balcony, Trump’s name was emblazoned across the Washington Monument in fireworks. This was not just bad taste, but idolatry — a brazen taking of our shared national heritage for political advantage.”

Stirewalt then took another swing at Republicans — while also blasting the Democratic Party — tagging both as part of a “nation of moral imbeciles.”

“The Republicans who knew better didn’t say anything about this behavior for the same reason that Democrats didn’t speak to the many excesses of the secular religion of antiracism or the suppression of free speech in general,” he wrote. “We have become a nation of moral imbeciles in which individuals increasingly outsource their moral reasoning not to their families, religions, or neighbors but to mobs of strangers arranged around obtaining and exercising political power.”

Stirewalt, who worked at Fox News for 11 years before his departure, criticized the network’s coverage of the 2020 election in his book, arguing that they shielded viewers from “a more accurate” view of the presidential campaign.

He was part of the network’s decision desk when they called Arizona for now-President Joe Biden on Election night in November 2020, a move that incensed Trump and many of his political allies.

Stirewalt has contended that was “canned” from the network after the decision desk made the Biden call, which provoked a strong reaction from “furious” viewers — including the then-president.

The spokesperson disputed that Stirewalt’s departure from the network was tied to the Arizona call and added that Arnon Mishkin, the head of the decision desk, would be returning for the 2022 midterm elections.

A Fox News spokesperson in a January 2021 statement said Stirewalt’s departure was part of post-election restructuring but didn’t comment further on why he left, citing employee confidentiality.

“As we conclude the 2020 election cycle, Fox News Digital has realigned its business and reporting structure to meet the demands of this new era. We are confident these changes will ensure the platform continues to deliver breakthrough reporting and insightful analysis surrounding major issues, both stateside and abroad,” the spokesperson said at the time.