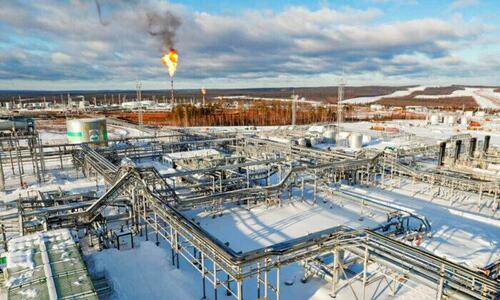 Authored by Tom Ozimek via The Epoch Times,

A senior European Union official said Tuesday that the bloc plans to cut Russian oil and gas imports to zero by the end of 2027, with his remarks coming as EU leaders continue to deliberate on moves to accelerate reducing the region’s dependence on Russian energy.

EU Economic Commissioner Paolo Gentiloni told Italian daily Il Messaggero in an interview published Tuesday that European Union aims to reduce its dependence on Russian oil and gas by two-thirds by the end of this year and phase it out completely by the end of 2027.

Gentiloni’s remarks provide more clarity around the timeline for the EU’s member states to wean themselves off Russian energy, with the EU’s prior statements on a phase-out of Russian fossil fuels expressed an aim of “well before 2030.”

His remarks also come a day after EU foreign policy chief, Josep Borrell, said that there’s not yet sufficient support from the bloc’s member states to impose a complete embargo on Russian oil and gas imports.

“At the moment, we in the EU do not have a unified position on this question,” Borrell was quoted as saying by German newspaper Die Welt on April 25.

“A final proposal for an embargo on oil and gas is not yet on the table.”

Borrell added that he believed the bloc would eventually be able to cut its dependency on Russian energy and so deprive the Kremlin of a key revenue stream.

“At some point it will happen and then Russia will feel painfully that the revenues from the oil and gas business are being lost,” he said.

The EU’s Russian energy imports were worth $108 billion in 2021, according to data from the World Economic Forum.

While all EU states have taken steps to cut imports of Russian fossil fuels, there has been little impact on Moscow’s earnings from crude exports so far, as Asian countries continue to buy up cheap Russian crude that European buyers don’t want.

According to a Bloomberg analysis, crude oil exports from Russian ports have risen sharply in recent weeks, with the Kremlin’s revenue from crude oil export duty surging by 25 percent for the week ending April 22.

Bloomberg estimates that the week’s crude shipments generated around $232 million in revenue for Russia, up $46 million from the prior week.

Europe is highly dependent on Russia for its energy needs.

In 2021, Russian exports accounted for more than 40 percent of the EU’s total gas consumption, 27 percent of its oil imports and 46 percent of its coal imports, according to European Commission data.

Energy represented 62 percent of the EU’s total imports from Russia in 2021.