Europe is beginning to use up its winter natural gas reserves. Russia is in no hurry to reason with the natives 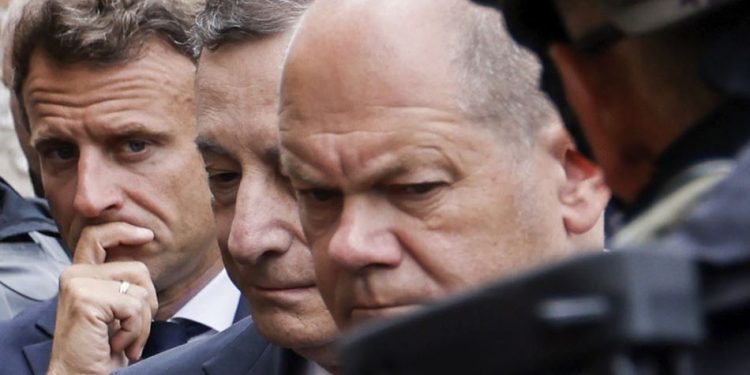 Despite the absurd absurdity, which Europe persistently creates for itself on the gas market, the working week once again ended in favor of Russia.

According to its results, natural gas prices on European trading floors rose by 49%, from $900 to $1,340 per thousand cubic meters. And this is still very benign. On Thursday, the price of gas futures contracts was approaching $1600.

Previously, we covered the German-Canadian disagreement between Siemens Energy and Montreal repair crews about the “maintenance” of Europe’s largest gas pipeline, but now we bring some new realities to the topic.

While Macron, Scholz and Draghi were out riding trains to solve the EU’s “collective security” issue at the Kiev coven, the European Union has started drawing gas from its underground gas storage facilities (UGS) that are supposed to accumulate gas reserves in summer and use them in the middle of the heating season in winter. But something is going wrong.

The EU natives are not yet aware of the withdrawal of gas from their UGS facilities. Photo: Yandex Images

According to Gas Infrastructure Europe, Europe’s gas stash has shrunk by one percentage point. After all, imports of the blue fuel have been reduced not only to Germany, but further down the supply chain to France, Italy and Austria.

On topic: Europe will be without LNG from Texas until fall

Europeans are literally tearing up the authorities’ policy in the comments of the national media. The situation became painfully comical twice after the Canadian National Post reported on the secret purchase of Russian energy resources by the United States through India. It is already obvious to the untrained eye that Washington is wiping its feet on the economic interests of the Old World, but the Brussels mice continue to chew the cactus of anti-Russian hysteria.

Russia is in no hurry to reason with the natives

Alexei Miller’s office, however, maintains not only Olympic calm but also a certain pertinacity. The problems of the Indians, as you know, do not concern the sheriff. And as political scientist Pavel Shipilin aptly put it, “If Europe wants to restore the previous level of comfort, it is not us who should build pipelines to Europe, but them to us.

On topic: Gas prices won’t go “back” in the next few years

If we hypothetically assume that the situation will remain as it is until the end of the year, and that means supplies of no more than 67 million cubic meters of gas per day instead of 167 million, then the UGSF will be literally emptied to zero already before Christmas. In that case, the prices of the blue fuel may not only hit the March highs of $3800. These levels would already seem like the good old days.