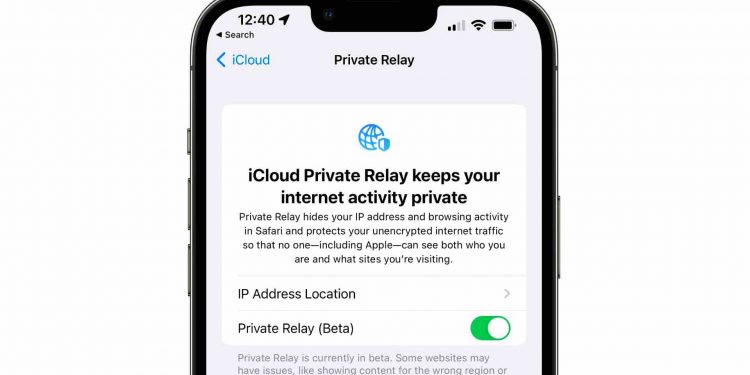 Major EU mobile operators are reportedly looking for Apple’s iCloud Private Relay service to be outlawed because it infringes upon EU “digital sovereignty,” according to a report from The Telegraph.

‌iCloud‌ Private Relay was a feature announced with iOS 15 that encrypts data so neither Apple nor a third-party may see users’ browsing activity. With ‌iCloud‌ Private Rely enabled, a user’s internet requests are sent through two separate internet relays, with the first relay being operated by Apple.

The second relay, operated by a third-party company, means no one, including Apple, can see what website a user visits. More information on how ‌iCloud‌ Private Relay works can be found on Apple’s website.

In August 2021, less than two months after ‌‌iCloud‌‌ Private Relay was announced, Vodafone, Telefonica, Orange, and T-Mobile sent a joint letter to the European Commission regarding their concerns over the service. As per the report:

Mobile operators have become locked in a power struggle with Apple after urging regulators to outlaw the iPhone maker’s encryption technology over claims it will undermine “digital sovereignty.” Some of Europe’s biggest mobile operators want the European Commission to stop Apple using “private relay” on the grounds that it will also prevent them from managing their networks.

In the letter seen by The Telegraph, the operators said that while ‌iCloud‌ Private Relay “purports to enhance users’ privacy when connecting to and browsing the internet by encrypting and redirecting traffic,” it also cuts off “networks and servers from accessing vital network data and metadata, including those operators in charge of the connectivity.”

The letter claimed that ‌iCloud‌ Private Relay will have “significant consequences in terms of undermining European digital sovereignty.”

In the letter, the operators also called upon the European Commission to label Apple as a “digital gatekeeper” under the EU Digital Markets Act. According to the report, such a label “has the potential to stop services such as Private Relay.”

Outside the EU, some network operators in the U.K. are also concerned. In its own letter, TalkTalk claimed that ‌iCloud‌ Private Relay would “make it more difficult to block dangerous content.” In a statement to The Telegraph, TalkTalk said it is “assessing how to respond to this shift and maintain our commitments to keeping our customers safe.”

‌iCloud‌ Private Relay is currently available in beta form for users on ‌iOS 15‌, iPadOS 15, and macOS Monterey, and it’s still unclear when Apple plans to launch it out of beta. According to The Telegraph, the European Commission has not responded to the letter from the EU’s largest mobile operators. We’ve reached out to Apple to comment on the concerns raised by the EU carriers.Tags: iCloud, European UnionRelated Forum: Apple Music, Apple Pay/Card, iCloud, Fitness+
This article, “EU Mobile Operators Want Apple’s iCloud Private Relay Service to Be Outlawed Over Concerns of ‘Digital Sovereignty'” first appeared on MacRumors.com