Elizabeth Holmes was found guilty. Here’s what it was like covering her trial from inside the courtroom. 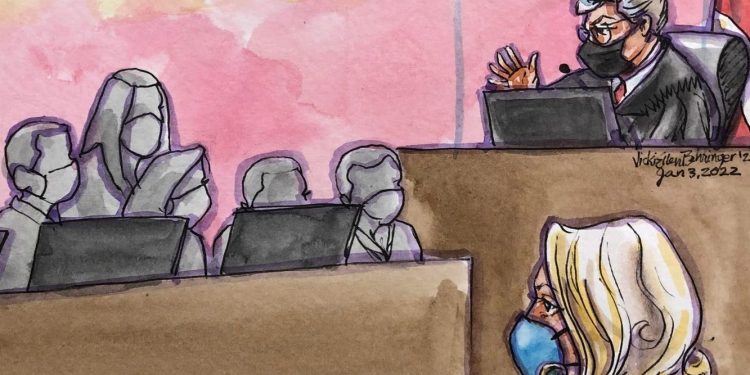 Welcome back to Insider Weekly! I’m Matt Turner, editor in chief of business at Insider.

So reads the headline on Adam Lashinsky’s last dispatch from the Elizabeth Holmes trial. Adam attended the trial from day one, covering Holmes’ surprise testimony and last-ditch attempts from her defense team.

As the trial concluded, Adam said the Theranos founder “may well walk,” thanks to the reasonable doubt her attorney had sown in the minds of jurors. But after seven days of deliberation, the jury found Holmes guilty on four counts of criminal fraud and conspiracy.

Read on for a fascinating Q&A with Adam about what it was like in the courtroom, the most shocking moment in the trial, and what’s next for Holmes.

Also in this week’s newsletter:

Inside the Elizabeth Holmes trial

A conversation with columnist Adam Lashinsky, who covered the Elizabeth Holmes trial for Insider:

What was it like to be in the courtroom from day one?

To be honest, somewhere between 50 and 80% of the time, it was a little bit boring. A lot of what happens in a criminal trial is procedural, a lot like in the movies but less dramatic. There are objections and colloquies and evidentiary hearings outside the presence of the jury. And there are lots of breaks, during which everyone tended to go to the same Starbucks down the street from the courthouse.

One thing that’s difficult to convey to people who weren’t there is how intimate a setting the courtroom is. There are precisely 34 seats available to the public, including press. There are 12 jurors and, at the end, two alternates. Everyone else — the lawyers, Holmes herself, and assorted friends and colleagues on both sides number about another 30 people. That’s it. We all used the same bathrooms, passed each other constantly in the hallways, and so on.

One of the best parts about covering the trial for me was the comradery with other journalists. We got to know each other well, and we helped each other out a lot, like making sure we heard things correctly. We took turns running for coffee, watching each other’s computers plugged into outlets, that sort of thing. It was like a little family. (In fact, “The Dropout” podcast reported that the jurors thought we acted like we were attending a cocktail party.)

What was one of the most surprising moments from the trial?

I mean, there’s really no contest there. By far, the most surprising moment of the trial was at 3 p.m. on Friday, November 19, one hour before the scheduled end of testimony for the week, when defense lawyer Kevin Downey stood up and said, “The defense calls Elizabeth Holmes.”

This move shocked the entire courtroom. Two defense witnesses preceded her, and they had been really boring. The day began in an exciting manner because the government rested its case after weeks and weeks and 29 witnesses. But then, the defense started slowly, and the conventional wisdom had been that Holmes wouldn’t take the stand. I knew people who had left at the lunch break that day because things were so slow.

I remember when she took the stand, I felt really nervous, as if I was thinking to myself, “Can I type fast enough and accurately record this historic moment?” We had been sitting through so many hours of testimony, and most of us didn’t anticipate something this dramatic happening.

As an aside, the defense was masterful at managing the clock, and I saw someone speculate that they called Holmes with one hour to go before the weekend to give her some time to get used to testifying before the following week, when she would spend hours on the stand.

What happens next to Elizabeth Holmes?

This is more complicated than it would seem. Next week, there’ll be a hearing — perhaps on Zoom because last week, the federal court system in Northern California suspended in-person trials due to COVID — to discuss if the government will retry Holmes on the three counts on which the jury didn’t reach a verdict and also to set a date for her sentencing. It is likely that she won’t be sentenced until the trial of her codefendant, Sunny Balwani, is over.

This raises the tantalizing prospect of her cooperating with the government as a way of winning points with the judge, who has discretion over her sentence. Guesses are all over the map from one or two years to more than a decade for how long she’ll be sentenced to prison. It is also widely expected she will appeal her conviction, so things could drag on for quite a while.

Amazon is facing what some insiders have called an “exodus” of senior talent amid growing dissatisfaction with pay — and documents suggest the company may bring about compensation changes to combat that.

Current and former employees, as well as documents viewed by Insider, indicate that the company has considered measures including special stock awards, higher counteroffers, and an internal tool to identify when employees are dissatisfied at the company.

Everything else we know about Amazon’s potential pay changes.

In 2020 alone, job changes, family responsibilities, and COVID-19-related regulations pushed almost 7 million people to reconsider their priorities and relocate. To capture the experience of moving during a pandemic, we spoke with 10 newly relocated people who shared their experience.

One chased outdoor space and landed in Montana, while another searched for cheaper rent and wound up in Oregon. Each ​​recent relocator reflected on the joys and challenges of moving and shared their wins and regrets on such a big life change.

Here’s what they told us.

Stefan Soloviev inherited a $4.4 billion fortune when his father, the real-estate tycoon Sheldon Solow, died in 2020. But Soloviev never fit his father’s vision of a successor.

A 46-year-old with tattoo sleeves and gold teeth poking out from the corners of his grin, Soloviev has at least 20 children under the age of 21 with four women, according to people who know the family. Several people described him as capricious with an explosive temper — and some are questioning whether he is capable of running the multibillion-dollar business his father built.

Inside the life of Stefan Soloviev.

More of this week’s top reads:

Event invite: Join Insider’s multisession editorial conference “Leading Into the Future of Work,” presented by Adobe, for a discussion on the monumental changes happening in the workplace and how smart leaders are navigating these transitions. Register here.

Compiled with help from Jordan Parker Erb and Phil Rosen.