Dutch Dairy Farmer Faces Having To Cull 95% Of His Cows 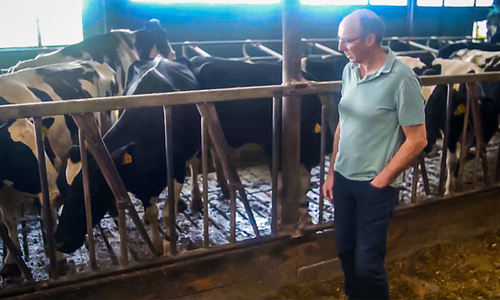 Dutch Dairy Farmer Faces Having To Cull 95% Of His Cows

Authored by Nathan Worcester via The Epoch Times (emphasis ours)

In the Netherlands, dairy farmer Martin Neppelenbroek is near the end of the line.

Dutch dairy farmer Martin Neppelenbroek at his farm in Lemelerveld, The Netherlands, on July 7, 2022. (The Epoch Times)

New environmental regulations will require him to slash his livestock numbers by 95 percent. He thinks he will have to sell his family farm.

“I can’t run a farm on 5 percent. For me, it’s over and done with,” he said in a July 7 interview with The Epoch Times.

Neppelenbroek made the remarks while speaking with Roman Balmakov, host of “Facts Matter” on EpochTV, during Balmakov’s recent trip to the Netherlands.

Neppelenbroek pointed out that not all farmers are required to get rid of so many of their cattle.

People living further from areas protected under Natura 2000, a European Union (EU) agreement for species and habitat preservation, can own more cattle.

That’s because the Dutch government’s regulations on nitrogen oxides and ammonia emissions are tied to sites’ proximity to those protected areas.

Dutch dairy farmer Martin Neppelenbroek at his farm in Lemelerveld, The Netherlands, on July 7, 2022. (The Epoch Times)

Farmers, truckers, and others across the Netherlands have led nationwide protests against that vision, partly spurred by a June 10 national and area-specific plan for curtailing nitrogen greenhouse gas emissions.

There’s a sword of Damocles hanging over them: the possibility of compulsory seizure of property by the government.

NOS Nieuws reported that Christianne van der Wal, the country’s minister of nature and nitrogen policy, has not ruled out expropriating land from uncooperative farmers.

According to a report from the U.S. Department of Agriculture’s Foreign Agriculture Service, the Dutch government has said its approach means “there is not a future for all [Dutch] farmers.”

For now, Neppelenbroek’s 70-acre-plus property is home to roughly 130 milking cows. It’s been in his family for half a century.

“I’m the second generation,” he said, adding that many farms in the Netherlands have been in families for much longer.

The Netherlands punches well above its weight in agriculture. The small, coastal country is one of the world’s top 10 food exporters.

“When you have not a lot of space, you have to use it as effectively as possible,” Neppelenbroek said.

“It’s a delta, and the climate is not too hot, not too cold. It’s an ideal place to grow.”