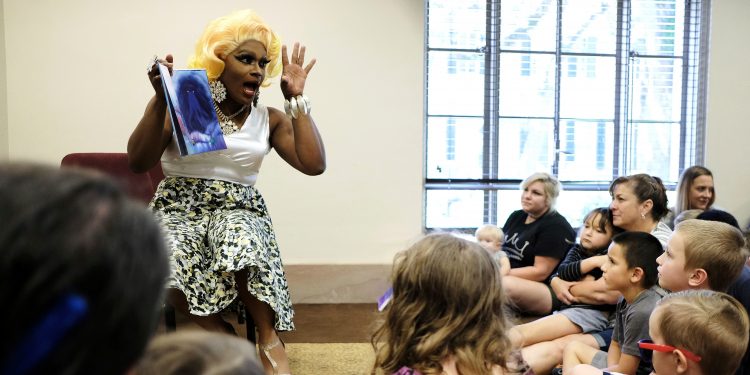 In this September 8, 2018, file photo, a drag performer by the name of Champagne Monroe reads the children’s book “Rainbow Fish” to a group of kids and parents at the Mobile Public Library in Mobile, Alabama.

Five men believed to be affiliated with the far-right extremist Proud Boys entered a library on Saturday in San Lorenzo, California, where local authorities say they shouted homophobic and transphobic slurs at a Drag Queen Story Hour event for children and their parents.

“The men were described as extremely aggressive with a threatening violent demeanor causing people to fear for their safety,” the Alameda County Sheriff’s Office, which is investigating the incident as a hate crime, said in a press release.

The same day in Coeur d’Alene, Idaho, police arrested and charged 31 people they said were associated with the white-nationalist group Patriot Front with conspiracy to riot after they were seen gathering near a Pride parade. The men arrested came from around the country, and the town’s police chief said they brought riot gear, metal poles, and at least one smoke grenade.

The incidents occurred less than a week after a crowd of demonstrators showed up outside a Dallas bar holding “Drag the Kids to Pride,” a drag show and brunch for families. Around a dozen protesters chanted “Christ is king” outside the bar, and a local news station reported one woman in the crowd held a sign accusing those involved in the show of pedophilia.

The bar, called Mr. Misster, in a statement said: “We had a group of protestors outside yelling homophobic threats, transphobic remarks and vile accusations at these children and parents.”

Hate and harassment targeting drag performers have escalated in recent weeks as events to celebrate LGBTQ Pride month have ramped up, but the harassment is also indicative of a resurgent right-wing campaign to associate gay and trans people with predatory behavior and pedophilia — falsely labeling them as “groomers” intent on coercing children into sex.

Much of the campaign has played out in plain sight, with right-wing influencers inciting online outrage against LGBTQ events and performers. Before the wave of far-right protests and harassment in the past week, the anti-gay Libs of TikTok Twitter account repeatedly posted information about family-friendly drag events to its 1.2 million followers.

Libs of TikTok specifically posted about the Pride events in Dallas, San Lorenzo, and Coeur D’Alene in the weeks before extremists and far-right protesters targeted those events and rallies.

Drag performers and organizers mentioned in Libs of TikTok tweets told Insider they faced vicious, targeted harassment campaigns and attempts to shut down their shows.

Nick, a 34-year-old drag performer who has been working in California’s Bay Area for seven years, has felt the backlash targeting drag performers. Nick was the focus of intense online harassment after the Libs of TikTok account reshared a video of their Pride Month performance for students during an event at a California charter school.

Nick, who asked Insider not to publish their last name to fears of further attacks, said they were one of three drag performers who were asked to perform at a school assembly for students in grades 6 to 12. Nick tweeted a clip of the performance days later and said the video was positively received until “right wing people found it.”

The 15-second clip showed Nick performing onstage in a long dress for a small crowd of students and staff, who cheered enthusiastically as Nick removed a series of wigs while Whitney Houston’s song “I Have Nothing” played over the speakers.

After Libs of TikTok shared the video, which now has over 510,000 views on Twitter, Nick said they received numerous death threats and messages calling them a “groomer.” Others claimed Nick was harming or otherwise “corrupting” children. Nick received hate messages on every one of their social-media platforms, leading them to either temporarily set the accounts to private or delete the profiles entirely.

Nick said their mother recently died, and right-wing trolls began writing comments underneath a post about her death. “That’s how far these people are going,” Nick said.

The renewed hate campaigns against drag queens is “sad and kind of makes you feel a little defeated at times,” Nick said. “I feel like people, especially since they’re behind a keyboard, feel more empowered. Sadly, even some of them go out in person and express it in very sad and hateful ways in front of children.”

“Something that was supposed to be really sweet and fun has just gone the opposite,” they said.

Libs of TikTok posts have targeted drag events across the country, as cancellations and protests follow

Over the past week, Libs of TikTok has posted dozens of times about specific drag shows or Pride Month events that involve children, claiming without evidence that these events harm kids. The account, which The Washington Post reported is run by a Brooklyn real-estate agent named Chaya Raichik, has targeted libraries, zoos, botanical gardens, and LGBTQ youth organizations for organizing events that involve drag performers.

The account claimed in its most recent post to Substack that it had been limited by Twitter three times, though most of the tweets targeting drag performers and venues that host them have been allowed to remain on the platform. Twitter’s hateful conduct policy prohibits accounts that exist to “promote violence” or “directly attack” individuals based on sexual orientation or gender identity. Neither Twitter nor Libs of TikTok responded to Insider’s request for comment.

“The left has no idea what they are unleashing,” the account said in a now-deleted tweet. “They keep trying to censor and silence me but unbeknownst to them, I actually thrive even more under those circumstances.”

In Apex, North Carolina, a suburb of Raleigh, a Drag Queen Story Hour event scheduled for June 11 was the subject of a Libs of TikTok tweet. On May 31, shortly after the account tweeted about the event, the town’s mayor, Jacques Gilbert, announced the city’s festival commission decided to remove it from Pride celebrations due to a “variety of feedback.”

The move sparked backlash from LGBTQ advocates, who argued that officials caved to a vocal minority who did not represent the interests of the town. The LGBTQ advocacy group Equality NC later in the week announced it would take over as the sponsor of Apex Pride, allowing the story hour to resume.

“Those are things that I have done specifically with drag and story hours since I’ve been here, mostly because I’m pretty adept now at talking to children about a myriad of subjects,” Purnsley said. “My background was in environmental science, and I was a science teacher for a little bit of time before I started doing drag.”

“I think people need to grow up,” Purnsley said. “They also need to recognize that all we are talking about when we are talking to children is accepting people for their differences, teaching them about the fact that there are options and possibilities for their life other than getting married and having a wife or a husband.”

As right-wing influencers such as Libs of TikTok have fomented online harassment against drag and LGBTQ events, lawmakers in both Texas and Florida have proposed legislation attempting to ban family drag shows.

Texas state Rep. Bryan Slaton, a Republican representing a district outside of Dallas, last week filed legislation that would ban drag performances in the presence of children. In a press release announcing the legislation, Slaton said the bill was the result of a “disturbing trend in which perverted adults are obsessed with sexualizing young children.”

Florida state Rep. Anthony Sabatini, a Republican who is also running for Congress, said in a tweet he planned to propose legislation that would make it a felony and terminate the parental rights of “any adult who brings a child to these perverted sex shows.” Sabatini called for an emergency session of the Florida legislature to consider his proposal.

The proposed anti-drag legislation follows a raft of other bills this year targeting the LGBTQ community.

In Texas, Slaton has also said he would work toward passing legislation that would make providing gender-affirming care to minors “child abuse.” Texas Gov. Greg Abbott in February signed an order that instructed the Texas Department of Family and Protective Services to investigate and prosecute parents of transgender kids if they give their child gender-affirming care. A judge last week temporarily blocked the state from executing that order.

Florida Gov. Ron DeSantis in March signed into a law a bill known as the “Don’t Say Gay” law, which aims to limit the teaching of topics like sexuality and gender identity in schools. LGBTQ advocates decried the law, saying it would harm children who identify as gay or trans, or who have LGBTQ parents. DeSantis last week said he was considering directing state officials to investigate parents who take their children to drag shows.

“It’s just outrageous that this is something that is taking up so much energy,” Cathryn Oakley, the state legislative director and senior counsel at the Human Rights Campaign, said.

Such efforts by lawmakers to target and misrepresent drag queens and other LGBTQ people are meant to distract from real issues facing people in states like Texas, Oakley told Insider.

“They’re taking their failure to address the real challenges that are facing Texas and then trying to twist that into something that’ll get people riled up with moral panic,” Oakley said.

The number of anti-LGBTQ bills enacted in state legislatures across the country reached a new high last year, according to data from HRC. Much of this legislation targeted trans youth, like laws enacted in Alabama and Louisiana that prevent trans athletes from playing on the sports teams that match their gender identity. Other bills and laws aim to criminalize doctors who provide gender-affirming care to minors.

“In 2022, we’re on the precipice of setting those records yet again,” Oakley said.

The attacks against drag culture have come as the art form has gone increasingly mainstream. “RuPaul’s Drag Race,” which premiered on Logo in February 2009, is in its 14th season and now airing on MTV. It’s also spawned numerous international franchises across the globe and spinoff series in the US. House Speaker Nancy Pelosi, a California Democrat, has appeared on the program twice, mostly recently in an episode that aired last week.

In North Carolina, Apex Pride and the story hour were “very lovely and very well received,” Purnsley said. The backlash against drag comes from people’s fear of changing ideas around gender constructs and identity, Purnsley said, leading to old panics that the LGBTQ community is somehow “corrupting children.”

“I just want to read to children, and it is not lost on me how mundane and basic this desire or this mission is,” Purnsley said. “I hope that people will stop taking my life and my community’s life for granted, that they will see that we want good for the world.”

Purnsley believes that if critics truly cared about kids, they would focus on issues legislating against gun violence and mental health rather than on drag performances and children’s story hours.

“Children are growing up hurting. They are killing themselves. They are being murdered,” Purnsley said. “We could do so much more than protest my padded Black ass.”